The Numerous Questions Around The Rise Of CGI Models And Influencers

Since Lil Miquela posted her first selfie back in April 2016, debate around the ethics of CGI models and influencers has been swirling. The pixelated It girl, whose “real” name is Miquela Sousa, has since amassed 1.3 million Instagram followers, collaborated with Pradaand Pat McGrath, and, most recently, scored an editorial in Vogue’s September issue. Another 3D colleague, whose existence is relegated to the realms of virtual reality is Shudu: the black digi-supermodel, who shot to fame after Fenty reposted a picture of her wearing Rihanna’s bright orange lipstick. 137,000 followers later, plus a handful of encouraging likes and comments from Naomi Campbell, Tyra Banks and Alicia Keys, and Shudu is not just a piece of artwork. She represents the technological advancements that fashion as an industry has to align with for fear of being left behind, and the ongoing tension between appearance and reality in the media. But what are the motives of these CGI beings, and is the industry right to be worried about the potential for 3D models to replace those in IRL?

It is not the first time Virtual Reality and fashion have collided. It has been over a decade since Alexander McQueen reintroduced a scandalised Kate Moss back into the fashion industry via a hologram on the catwalk. Riccardo Tisci gave Japanese pixel-made virtual “singer” Hatsune Miku a Givenchycouture makeover in 2016. And Nicolas Ghesquière enlisted Final Fantasy XIII character Lightning for Louis Vuitton’s spring/summer 2016 campaign. But development is underlined by fear of the unknown. “When drones came out we were up in arms, never mind driverless cars!” Cameron-James Wilson, the creator of Shudu, tells Vogue. “Our natural reaction to technology is to worry.”

Wilson, who worked as a fashion photographer for 10 years, stumbled across the possibilities of virtual model creation via computer programmes Daz3D and Marvelous Designer. “It’s like having access to the best studio in the world on your screen,” he says of how a stint of career soul searching turned into Shudu’s conception. The subsequent backlash he received – “How can a white man realistically realise and represent a black woman?” the media asked – means he is well placed to answer questions on how CGI can impact the industry.

“I had a lot of internal debate, philosophically and ethically,” he recalls. “A lot of people thought she was real, and I felt uncomfortable about this. Now, I try to make it apparent that it’s me behind the account. Being honest and transparent means that I can open people’s eyes to the programmes that are out there and what they can do. The problem with images is that we’re hardwired into believing that they’re real.”

He believes that the critique “arose from concern about representation in fashion in general” rather than judgement about his artwork. “I’m glad it sparked a debate, because it led to honest conversations. A lot of people aren’t aware that there’s a real problem with diversity in 3D as well!” When creating Shudu, many of the digital assets he needed, such as those to create her hair, weren’t available.

Wilson has decided not to monetise Shudu – perhaps fearful of more jibes concerning cultural appropriation – but other developers behind 3D influencers treat social platforms as their real-life counterparts do, utilising sponsored posts and campaign images to raise their profiles and bank balances. “I, myself, am looking to generate cash flow through designing models for brands who want a digital spokesperson,” Wilson shares. “As we move into the VR space, it’s inevitable that companies will want to communicate to potential customers on these platforms.” 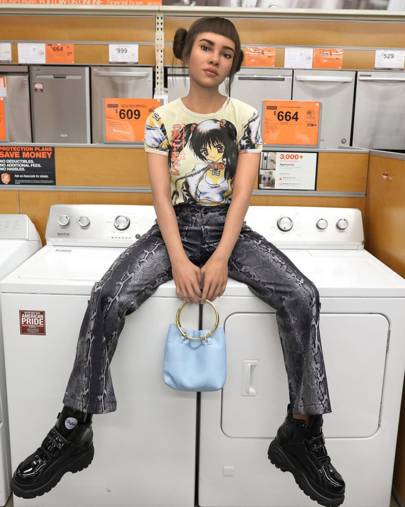 The technology to achieve chatbots that will revolutionise customer service is available today, but costs need to be brought down, and Wilson – along with numerous developers around the globe – is looking at ways of accomplishing this. “We’re going to see a lot of crazy stuff come out in the next few years,” he muses, before referring to The Sims as a similar parallel for what life could become.

Steps to make humans and the VR community no longer mutually exclusive are also well underway. “CGI could become a massive benefit to real-life models, because there will be the potential for them to make very detailed scans of themselves,” Wilson explains. Their avatar can then be sent on multiple jobs around the globe without the model being there in the flesh. “Once someone is scanned, they are, in a way, immortalised. A person’s career could last decades, centuries," Wilson chimes back in. "If the technology to scan and capture Marilyn Monroe had been around then, her career could very much be still going today.”

Wilson’s career trajectory has allowed him to dream on this scale, but, for the rest of us, tens of questions around the ethics of this arise. Whose intellectual property are these scans? How can an individual, who is no longer alive, protect themselves from identity theft? The human rights standards the industry is struggling to maintain now would surely go out of the window, and the problem of counterfeiting in fashion would reach new heights.

For now, though, humans, Wilson believes, have nothing to worry about. With product development will come a greater understanding of how to license data securely. And, going back to the basics, CGI beings are native to their virtual world. A 3D model can’t walk down a catwalk, or embrace a fan. And, crucially, humans crave this real emotion. “People like watching their favourite celebrity go out and get drunk – and be, well, human,” he laughs.

First and foremost, CGI “explores new realms of creativity and creates new opportunities in an industry which is inherently inclusive,” Wilson surmises. “Instead of being a certain height, or a certain this, or a certain that, what if all you needed was imagination and a basic understanding of 3D to have a shot in fashion?” Let the debate continue to swirl.

Posted by FASHIONmode News at 8:29 AM