Wait, Are Rihanna And Donald Glover Working On A Secret Project Together?

The Rihanna Navy went into overdrive last night when a photo surfaced of beloved Rih with a rapper and actor — and no, it wasn't Drake. The performer in question was a shirtless Donald Glover, with whom Rihanna posed happily in... a room? With a painting of a palm tree? Somewhere that looks pretty hot? Gleaning what we can from this one photo is like finding love in a hopeless place but, like the rest of the Internet, we’re obviously going to do it. Everyone wants to know: what are Rihanna and Donald Glover up to? 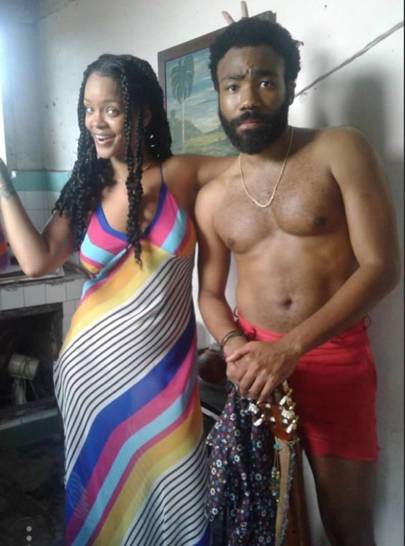 Fenty fans were quick to speculate that Rih and Glover are in Cuba, on set of a Hiro Murai movie they’re filming in Havana. (Other photos of Rihanna on set have also circulated on Twitter.) Murai last directed Glover’s critically acclaimed "This Is America" video, and has also directed the actor in episodes of TV show Atlanta. A Cuban website has also said that Black Panther’s Letitia Wright and fellow Brit Nonso Anozie are there. The title is, supposedly, Guava Island.

All we can say is that we’re ready for more Rihanna, all the time — and she could do far worse than Glover in terms of a new creative force to join up with, however temporarily — so whether it’s Guava Island, or something to do with her rumored new album, we are ready and waiting.

Posted by FASHIONmode News at 10:48 AM