Revival Of The Fittest: Inside The Poiret Launch 90 Years In The Making

Although  this season will be the first time Poiret’s name will appear on the official Paris Fashion Week schedule - filling the space once occupied by Phoebe Philo’s Céline - most if not all the designers presenting in Paris this season have, in one way or another, been influenced by its original founder, Paul Poiret.

Nicknamed le Magnifique or, as the Americans referred to him, the King of Fashion, Poiret is credited with liberating women from the petticoat in 1903 and, most famously, the corset in 1906. He invented the sheath and sack dress (although both are usually attributed to Cristobal Balenciaga, who modernized them in the 1950s) and proposed the first couture trousers. He was the first designer to release a fragrance - a decade before Mademoiselle Chanel - named after his first daughter, Rosine, and expanded into lifestyle with his own interiors boutique, Les Ateliers de Martine, named after his second. His designs are relentlessly referenced, most pertinently in the collections of John Galliano for Christian Dior, the airy silhouettes of Alber Elbaz’s Lanvin, the sporty suiting of Dries Van Noten and the diaphanous hems of Valentino, to name a few. In 2005, a 600-piece collection of his designs, dating from 1905 to 1928, were discovered in the home of his granddaughter and set records at auction at £1.2 million for the lot. Two years later, the Metropolitan Museum of Art in New York held a retrospective of his work.

Following a 90-year dormancy since it’s closure in 1930, the house will be revived by a female-led team including Beijing-born, Paris-based couturier Yiqing Yin in the role of artistic director and Belgian luxury business mogul Anne Chapelle, the woman behind the success of Ann Demeulemeester and Haider Ackermann. The venture is backed by South Korean fashion and beauty conglomerate Shinsegae International, which is led by Chung Yoo-kyung, the wealthy granddaughter of Samsung’s founder. For Chapelle, Yin was an obvious choice. “The most important thing is finding the designer, the person whose hand you believe in and with whom you have chemistry,” she explains. “I chose her for her mental strength, philosophy – and she is very mature, much more than you would think. I wanted to combine this fragility of the hand and strength of mentality,” Chapelle adds. When asked about Yin’s youth she explains, “I wanted freshness, I wanted somebody young and vivid and wanting to succeed and without baggage.” After all, Poiret was not yet 30 when he penned some of his most innovative creations. 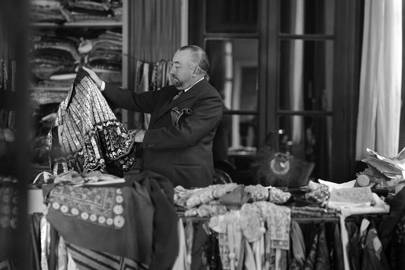 His focus was the hang of a garment from the shoulders in voluminous, yet weightless silhouettes that borrowed from Indian, Islamic and Greek robes, the Roman chiton as well as the empire lines of Edwardian gowns and high-waisted dresses of Post-Revolutionary France. Despite Poiret’s herculean influence on fashion, his legacy faded following World War II - a period that favoured the conservative realism pioneered by Coco Chanel over what had now become the fanciful, cumbersome, impractical romance that Poiret represented. In 1944, the designer died in squalor.

Charged with the behemoth task of resurrecting the maison, Yin, who won the Grand Prize of Creation from the City of Paris in 2010 and the ANDAM Prize for First Collections in 2011 is, at least outwardly, calm in the days before her debut. “I think the grace of Poiret’s wardrobe lies in the pure and radical architecture of his clothing,” the soft-spoken designer offers during a walk-through of the collection she and her team have been working on for the last year.

For the launch, Yin explains that she began with what she felt was the strongest archive - the printed jacquard - motioning to an iconic black-and-white image of a woman wearing the cocooning Le Perse coat taken in 1911. It was this print that formed the basis of Yin’s surface treatments: repainting it in languid, raw brush strokes, blowing it out into an unrecognizable macro view. The same print again is then engineered into rich, painterly house jacquards woven from wool and silk that, like Le Perse, cocoon the body with Poiret’s signature curvilinear, hunchback silhouette. There is glittery, lamé-esque suiting in Bowie silver, and carmine red with a draped, asymmetric scarf lapel that all but disappears into the form of the jacket. One cobalt blanket coat is trimmed with the fringing that forms the original selvedge, while the shoulders of a jet black leather bomber unbutton into an organic, almost floral shape on the wearer. 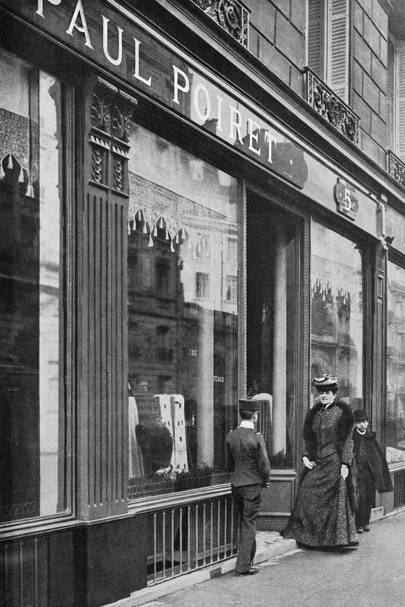 Most of the pieces, Yin tells me, began as simple rectangles that are then draped, refined, refitted and adjusted to create the right fit. One burnished metallic dress that at first glance is an undulation of cowls is, she explains, simply two flat rectangles anchored in two different points on the body. The rectangular paneling is repeated in the lapel-to-shoulder panels of an ankle-grazing cashmere cocoon coat whose seams are finished in gold thread, and in the ashen grey suiting for which Yin works with a combination of flat pattern and drape. “Today we need tailoring,” she explains of the modern addition to the Poiret vocabulary. “But our structures, our shoulders are very pure architecturally.”

The collection is bolstered by a sort of cadavre exquis approach to accessories - square-shaft boots in patrician tones with industrial statement heels, and jewellery heavy with raw chunks of crystal against gilded nails, screws and quotidian objects. These, in the pioneering spirit of its founder, will be in addition to all the lifestyle categories of a modern house, including cosmetics and fragrance, says Chapelle. “I want to keep a house that the Paris streets can be proud of,” she muses. “It’s to build on and to go to all markets from young to old, from luxury to prêt-a-porter, every level.”

And in the wake of the successes and failures of other recently revived luxury houses, are there any challenges that Chapelle foresees? “It’s a good moment to go back to femininity, to go back to sensibility, to go back to the woman in an era where we are all trying to make product and pushing and following business models of sportswear. Let them do that. Let us go back to the beauty and the core of the woman. We are smart in the meantime, but let us be beautiful. That’s a good option.”
Posted by FASHIONmode News at 11:23 AM