What could be more Parisian than Helmut Newton’s photograph of YSL’s le smoking? The women’s tuxedo pioneered by Saint Laurent in 1966 and photographed by Newton for French Vogue in 1975 is the epitome of louche glamour. Inspired by the satin-lapelled smoking jackets worn by men (cigar ash would roll off the satin) and the gender-nonconforming women who wore them, such as Marlene Dietrich and Niki de Saint Phalle, it even took on a sense of social subversion around the world. It was banned from restaurants and the women were still legally forbidden from wearing trousers in some countries.

While Saint Laurent ignited the craze for le smoking, today there are interpretations of it that deserve their own spotlight. The best of them all come from Pallas, the self-described Parisian equivalent of Savile Row for women. The small couture house has been making tailoring for decades for the likes of Mugler, Ghesquière-era Balenciaga, Céline and Proenza Schouler. However, the label actually began in 1960 as a more traditional tailoring firm led by David Pallas — upstairs in the atelier is a photo of HM The Queen wearing a tweed Pallas creation for Norman Hartnell — and in 1991, David’s son Daniel took over the business with his wife Véronique.

Quite quickly, the couple realised that their elderly customers were getting older, and the risk for fizzling out with tweed suits and gloves was getting greater. So, confident in the ability of their atelier and keen to survive another half century, the husband-and-wife tried to pivot the business in 2013 and re-launch the Pallas ready-to-wear label with an emphasis on sharp, sexy le smoking tuxedo suits, crafted from satin-trimmed crepe or grosgrain with silk lapels by one artisan from start to finish. Theirs, by the way, is lighter and more sinuous than Saint Laurent’s hallmark. For autumn, the suits will come in delicious colour combinations of shocking pink and scarlet.

Since that lightbulb moment, the brand has expanded beyond tuxedos and into pencil skirts, blouses and coats, maintaining the sleek aesthetic that initially clicked with editors and buyers. Today, it is sold at luxury meccas such as Net-a-Porter, Harrods and Matchesfashion. However, beyond its ready-to-wear, Pallas often attracts smart women who want something unique and custom made — hence the Saville Row comparison. In recent years, one of those clients was Claire Thompson-Jonville, editor of heavyweight style title Self Service, whose patronage led to a collaboration in the form of a capsule collection that we can safely described as the ultimate Parisian wardrobe. 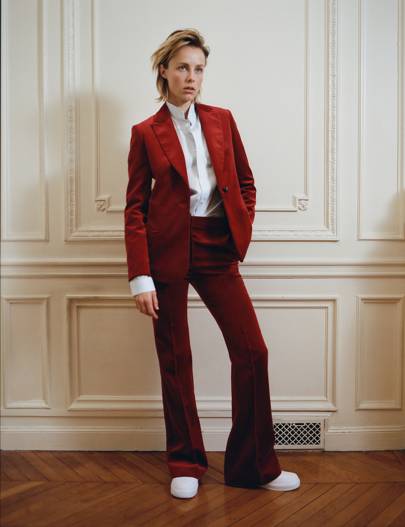 Born in Scotland and raised in England, the stylist was a self-described eclectic English girl growing up. Then she arrived in Paris just over a decade ago and went through a classic Birkin-esque transformation into a storage-poor Parisienne with an edited wardrobe of perennial classics. Her encyclopaedic memory of realist fashion photography — and the discreet-chic clothes that have starred in it — came in handy when it came to executing her particular eye for the collection. Many of the pieces pay homage to icons of the 1990s — Kate Moss in a strapless jumpsuit, Caroline Bassette-Kennedy in a leopard coat, Tom Ford’s red velvet bombshells — but with a dose of practicality and simplicity that cuts through the noise with perennial hanger appeal.

There’s a claret velvet trouser suit with just the right amount of flare and a satisfyingly wide peak lapel. A perfectly proportioned boiler suit with buttoned pockets, crafted from navy men’s suiting flannel and worn a white polo underneath and crisp white sneakers. A wide-lapelled camel coat roomy enough to be worn over a hoodie. A surprisingly soft faux ponyskin leopard pea coat. A hot-white tuxedo with a slightly contrasted lapel. Refreshingly, the list goes on, but not excessively so.

“These are things you can keep in your wardrobe and mix up and it’s not of-a-moment,” says Thompson-Jonville. “You want to be able to wear them with things with like a denim jacket and just keep it timeless. You want to be able to go to a dinner as well and not necessarily have everybody know what you’re wearing.”

What’s just as impressive is that every item is still handcrafted in Paris by a single craftsman from start to finish. The garments start from the patterns (cut in Daniel’s childhood bedroom, now a workroom) which are packaged up into brown paper parcels with handwritten client cards and the workmen take it home to work on it. On average, it takes a whole day for one of them to make a full suit. The in-house label now accounts for more than half of Daniel and Véronique’s business and more collaborations are in the pipeline. Business appears to be booming, and as for those tuxedos — as long as there is Paris, it will always be smoking.

Posted by FASHIONmode News at 12:43 PM