When I last visited Seoul Fashion Week in October, the South Korean capital was gearing up for the February Olympics amidst growing tension with its North Korean neighbour. Going to fashion shows just thirty miles from the border, it was surreal to think how close you were to the communist dictatorship on which President Trump was waging weekly Twitter wars. Only a season on, a successful Olympian residency has seen the two Koreas parading under a unified flag. Kim Jong Un’s sister even attended. And come May, the North Korean ruler and the American president are set to meet in a historic first between the rival nations. When it comes to unpredictability, it seems fashion finds its own rival in politics. I was curious as to how this schizophrenic political climate is affecting the exuberant youth in Seoul. An increasingly documented phenomenon, South Korea’s cosmopolitan millennials couldn’t cut a greater contrast to the uniforms of the North.

Everywhere you turn outside the fashion shows held at the Dongdaemun Design Plaza – Zaha Hadid’s rather charmless spaceship of a conference centre – young Koreans are embracing the newest waves in fashion to a degree that would make influencers in Europe and New York blush. You just don’t see impeccably styled determination like this anywhere else in the world. “Being a young designer in Seoul now is full of excitement and tension,” Maxxi Jae-Hyung Lee told me. “The political situation with North Korea is a national tragedy and I think now it is up to our generation to take responsibility.” A former anthropology student, the Seoul-born designer changed academic lanes to London College of Fashion before launching his collection at Seoul Fashion Week last year under the brand name Maxxij. His show on the emerging designer runway on Thursday morning was easily one of the week’s most impressive.

Gargantuan protective silhouettes fused sportswear with textures from the ladylike wardrobe in a collection that felt current without the copycatting of which the South Korean fashion scene is sadly guilty too often. “My design philosophy is about liberation and recreation of identity through fashion,” Lee said, echoing the energy of Seoul’s fashionable – and, in Western eyes, quite fearless – youth. “The culture of Seoul and Korea is making very brave moves with its unique character, which is now being recognised more by other nations,” he told me. “I think the world is eager to seek different content, and Korean culture has great potential.” Most remarkably, young men in Seoul are beyond advanced when it comes to the idea of gender-fluidity, casually applying make-up, intricate hairstyles and womenswear to achieve their perfectly measured looks. 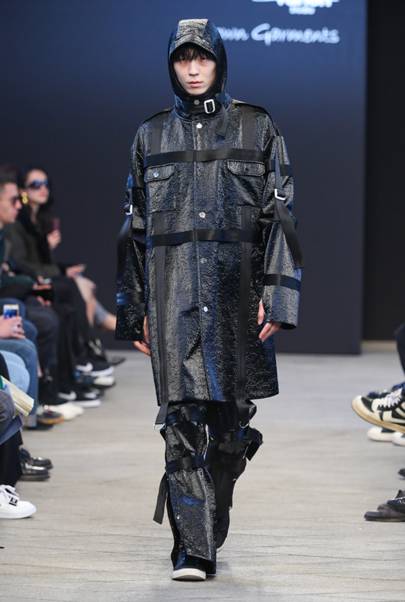 It’s expressed in the unisex runways that define almost every show at Seoul Fashion Week, from the futuristic athleisure of Heta and Vanon Studio – two other promising emerging talents – to the city’s most celebrated designer duo, Blindness, who competed in the LVMH Prize last year. (This year, the equally talented nominee Younchang Chung of the label The-sirius flew the flag for South Korea.) One of the Balenciaga-clad young men, who caught my eye, was the model Na Jae, who had just returned from his first season abroad, already with runway walks including Maison Margiela, Kenzo, Charles Jeffrey’s Loverboy, Dries Van Noten and both Givenchy’s haute couture and ready-to-wear shows under his belt. “Gender-fluidity and Korean boys, who dress well, are actually co-related,” he told me, “because they are growing up in K-Culture: K-Pop, drama, and entertainment.”

You only need to turn on Korean MTV in your hotel room to see the pretty-boy bands of twenty-something men covered head-to-toe in labels like Saint Laurent and Vetements to get his point. In Korean mainstream fashion culture, avant-garde isn’t a daunting concept. As far as their unique locality on the world map, Na said it’s not something that troubles him and his peers. “Young people in Seoul are very affected by celebrity and social media, specifically on Instagram. They are obsessed with fashion, uploading their daily looks and sharing their fashion information with the internet community. For sure, they really don't care about the North Korea situation, It doesn't mean they’re one hundred percent optimistic about it, but they don't give a shit,” he told me and laughed. 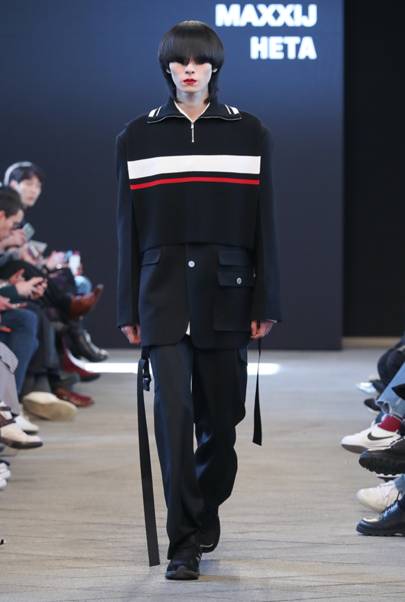 “Seoul is the most rising fashion city in Asia because of things such as K-Pop, K-Beauty and K-Food. It’s not only a fashion and beauty city but also always looking for new vision in fashion.” In the case of many of the designers, who fill the vast and not easily navigated six-day show schedule at the seasonal Seoul Fashion Week, it’s expressed in a sense of de- and reconstruction like this season’s Kiok and R.Shemiste collections, or various adaptations of sportswear such as the Charm’s show, whose commie berets and military suits looked like post-Soviet nostalgia… perhaps by way of North Korea. “These days I think of the gender-fluid trend as part of a human evolution to be more ‘flawless’,” Katie Chung told me. “As a city of early adaptors, Seoul is probably presenting this phenomenon more rapidly than others.”

Designer of the menswear brand Wooyoungmi, which shows at Paris Fashion Week and is arguably the most successful brand to come out of South Korea, Chung studied at Central Saint Martins and took the creative helm last year at the company founded by her fashion entrepreneur mother, Madame Woo, in 2002. “Compared to other markets, Korean consumers tend to be early adaptors in the fashion field and sensitive to trends,” she said. It explains the massive attention and budget put into Seoul Fashion Week, which now needs to push local stars like Blindness and The-sirius into the international spotlight more than ever. Because unlike South Korea’s K-Pop industry, which – due to language barriers – doesn’t effortlessly sieve into Western radio play, fashion is a language spoken universally, yet dependant on an international platform in one of the four fashion capitals in order to gain global recognition.

In that sense, Seoul Fashion Week is an excellent breeding ground for talent, but could do with a few tweaks in execution to present these designers at their best. The show schedule could be edited down and show venues added away from the Dongdaemun Design Plaza, which would also promote the city of Seoul better to international guests. In a political climate that has all eyes on South Korea, now is the time for Seoul to show off its exports. As for that situation to the North, Katie Chung told me it’s not always as easily ignored as many young people in Seoul will have you believe. “It’s hard to say that it necessarily affects me, however, I’m not living without being conscious of it. I believe most people, who live here are half-and-half minded. As a metaphor, it’s like the earthquake in Japan. You never know.”

Posted by FASHIONmode News at 3:59 PM