Dipti Sharma On Breaking The Rules For Balenciaga

"I've been a rebel since childhood," 20-year-old Dipta Sharma tells Vogue. But, unlike most unruly youngsters who swerve chores or skip school, Sharma went against the wishes of her parents and entered a modelling competition that would transport her out of India and onto the global runway.

"It just came from inside suddenly," she explains of her desire to swap Indian tradition for travel. "For a long time, I was looking for my real path. When I started watching runway shows on Fashion TV everything inside me suddenly started screaming, 'This is it!'"

She taught herself about the industry via Google on borrowed mobile phones, and quietly ignored her society's beliefs on how girls should act and live their lives - and what they should wear to do so. "My parents had to endure a lot of criticism from other people," she says of breaking away from the mould. "People kept asking my younger sister how could I choose such a low profession: Did I change in front of men? Did I wear a bikini? Did I compromise myself in order to get work? It's ironic because the same people now say they are so proud of me. It makes me laugh at the kind of world we live in."

It took three years of sending her own Polaroids to agencies in New York, London and Paris, before she signed to a local agency, Anima Creatives, which helped bridge the international gap for her. Then Balenciaga came calling.

"I remember walking for [creative director] Demna Gvasalia and [his muse] Lotta Volkova, and the next thing I knew I was walking down the runway in Paris." She was promptly cast in the paparazzi-style SS18 campaign, and had her first pinch-me moment. "Being the only Indian female model ever to be in the campaign was a huge honour for me and everyone in India. I can't thank Demna enough for it." 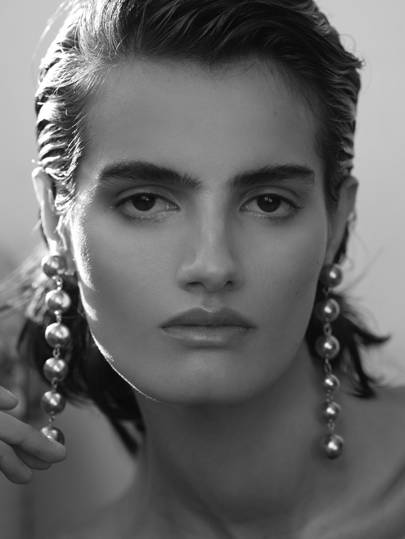 Her star continued to rise when she was included in Marc Jacobs's and Katie Grand's vision for the Marc Jacobs Beauty Shameless campaign, her second career highlight.

Sharma has since swapped India for New York, and is living and learning the ropes with a fellow model. Sometimes her inner rebel rises up: "I can't plan anything, which annoys me because I like to make decisions for myself," she says, "But in this profession you have to sit back and go with the flow."

The industry's work ethic has surprised her. "Everyone is so driven to make things happen and to be respectful of other peoples' visions," she muses, before adding, "I was surprised when I heard and read about models' experiences with exploitation."

She has one piece of advice to aspiring models who might read this from their bedrooms in India, or elsewhere: "If you want to be something in life start now and never give up. You may fail millions of times like me, but keep going. If I can get here, so can you."

Posted by FASHIONmode News at 7:17 PM