French designer Hubert de Givenchy has died, a statement made by his family confirmed today. Givenchy, who was 91 years old at the time of his passing, founded his eponymous brand in 1952 and was quickly given the moniker "Le Grand Hubert".

Clare Waight Keller, current artistic director at Givenchy, told Vogue: "I am deeply saddened by the loss of a great man and artist I have had the honour to meet and get to know since my appointment at Givenchy. Not only was he one of the most influential fashion figures of our time, whose legacy still influences modern day dressing, but he also was one of the chicest, most charming men I have ever met; the definition of a true gentleman, that will stay with me forever. My deepest thoughts are with his loved ones in this difficult time.”

Givenchy was just 24 when he opened his own couture house, and in February that year presented his debut collection, featuring the Bettina blouse, which became an early emblem of his aesthetic.

Givenchy was one of the first designers to form on - and off-screen - design collaborations with celebrities, including one of his most famous clients and dearest friends, Audrey Hepburn. 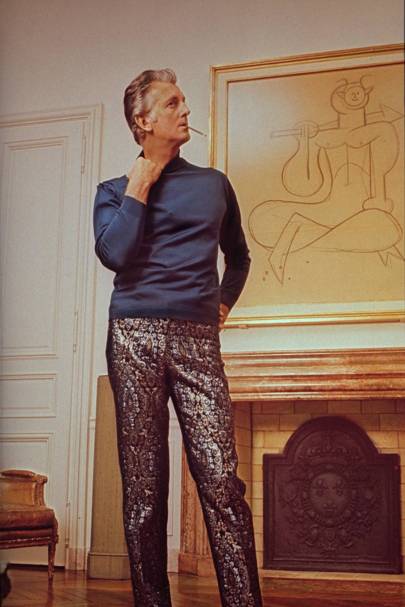 Designing the slim-cut black jumpsuit and the strapless, embroidered organza gown immortalised in Sabrina, Givenchy forged a friendship with Hepburn that was to span seven subsequent films, creating some of the most iconic looks in cinematic history - including the famous black sheath dress worn by Hepburn in Breakfast at Tiffany's.

After stepping down from the brand in 1995, Givenchy handed the reins to John Galliano, who was then followed by Alexander McQueen, Julien Macdonald and Riccardo Tisci. Tisci remained at the house for 12 years, redefining modern luxury through sportswear infusions and further mirroring Givenchy's own focus on close celebrity partnerships. In May 2017 Waight Keller took the top job, the first women to hold the position.

Remembering the late designer, Vogue editor-in-chief Edward Enninful added: "Hubert De Givenchy was one of the great couturiers of the century. He was a true pioneer, especially in the way he cultivated designer and celebrity relationships and, with his work with Audrey Hepburn, he practically invented the Little Black Dress. With his namesake house, he left a rich archive for designers like Lee McQueen, John Galliano, Riccardo Tisci and now Clare Waight Keller to carry on the Givenchy legacy. I never had the pleasure to meet him myself, but today the fashion industry has lost one of its most revered designers."