Richard Quinn: "I Don't Think A Gimp Mask Will Shock The Queen"

Richard Quinn´s second collection since graduating from the Central Saint Martins' MA programme in 2016 went down in history yesterday, as the Queen sat front row. Her audience was requested by the British Fashion Council to present Quinn with the inaugural Queen Elizabeth II Award for British Design, a royal stamp of approval the Peckham-based designer found out he was receiving just weeks before his autumn/winter 2018 show.

"I remember getting the bus back from the BFC meeting with Caroline Rush at Somerset House, and thinking 'right, let's do this'," Quinn tells Vogue the day after his presentation. "Caroline told me it would be massive and that so many people would come, so I thought I might as well just go for it, rather than thinking about whether it was going to sell, or what people would think. I looked back on what I had done so far and what people had reacted well to and really saturated the collection with it."

He transformed the foils from his MA collection into ballgowns emblazoned with botanical prints - "She liked those," he laughs referring to Her Majesty's reaction, "That's where all the pictures of her cracking up come from" - and his signature florals into trapeze-shaped coats and thigh-high boots.

The scarves were a direct tribute to Her Majesty's Balmoral wardrobe, but Quinn was at the mercy of multiple NDAs and couldn't even put a picture of her on his moodboard. "People kept asking why there were so many scarves, and then it finally made sense once the Queen arrived at the show."

Did he feel the need to mute the bondage themes that have become his signatures? "No! We thought we would ham it up a bit," he says. "She's known for her sense of humour, and she's seen a lot in her life. I don't think a gimp mask will shock the Queen." 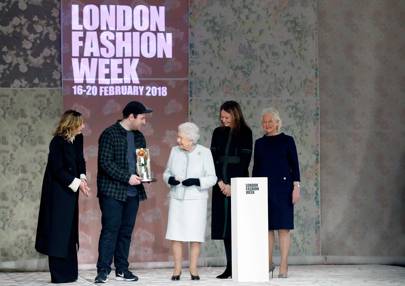 In fact, Quinn was relaxed throughout the entire show process. "It was the first time I haven't felt pressure, because everything was done on time and in place. I treated it like a celebration rather than a pressured event." His family, none of whom he leaked his royal secret to, were in the audience, and had a date at Five Guys planned for afterwards.

"I had the feeling that I was watching it all on TV, not in real life," he recalls of seeing the Queen seated on her royal-blue cushion, suited in aquamarine. As she handed over the rose-shaped award that was designed by Angela Kelly, who has served as Her Majesty's personal assistant and senior dresser since 2002, he was shocked by her voice. "We always watch her Christmas speech as a family, and she pronounces everything so clearly, but actually she's very quiet and soft."

"She kept emphasising that the award is for young designers," he adds. "That sentiment was so nice, because I was collecting it on behalf of everyone who has got me where I am, and for the studio because it really is a young community. Our door is always open to anyone."

For now, he's deciding where his statuette - a replica of the one seen in the pictures - will sit, and trying to get the self-described "bomb site" in order for the BBC, who, as we speak, is waiting to interview him for tonight's news. "It's all happened so fast," he muses as he clatters around the studio. With collaborations with Debenhams, Lane Crawford, Matchesfashion.com and a second with Liberty already in the pipeline, we have a feeling 2018 will go by even faster.

Posted by FASHIONmode News at 3:13 PM