Last season in Milan, guests complained of difficulty in seeing the Guccilooks that comprised the spring collection - it was dark, misty, with guests sat far back from a cavernous runway filled with relics and ruins. There could be no mistaking what came down the runway for autumn/winter 2018, however: a sparklingly clean, turquoise operating theatre set the scene, with rather ominous hospital beds lying empty in each room as models wended their way around them in typically loaded looks (ripe for journalistic dissection). As per, the accessories were fantastical and delirious in equal measure - but this season Alessandro Michele went one step further in his pursuit of Gucci-fied eccentricity.

Citing the feminist Professor Donna J. Haraway in the characteristically gnomic show notes, he was keen to explore the notion of what he called the Gucci cyborg. "Gucci cyborg is post-human," read the notes. "It has eyes on its hands, faun horns, dragon's puppies and doubling heads. It's a biologically indefinite and culturally aware creature. The last and extreme sign of a mongrel identity under constant transformation." Suck on that - and on the question on fashion editors' minds the world over: will Gucci enforce a full look policy? Here's Vogue's edit of eight nuts accessories on the Gucci catwalk for autumn. 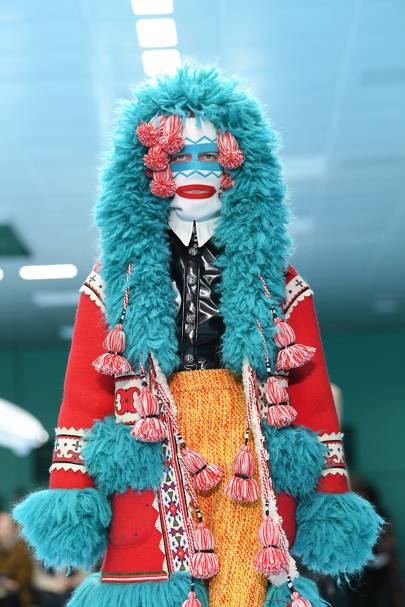 Alessandro Michele surely had Leigh Bowery on his mood board for autumn: the headgear overtly referenced the complex looks the Christian-boy-turned-club-kid magicked up with the Paris-based corsetier Mr Pearl and those balaclavas he tore round London in during his Blitz! heyday. Gucci's balaclava count was high: knitted striped and pom-pom-sporting styles were combined with turbans and diamante grids, sleek black styles came with angular Sci-Fi sunglasses, others came with diamante fringes. 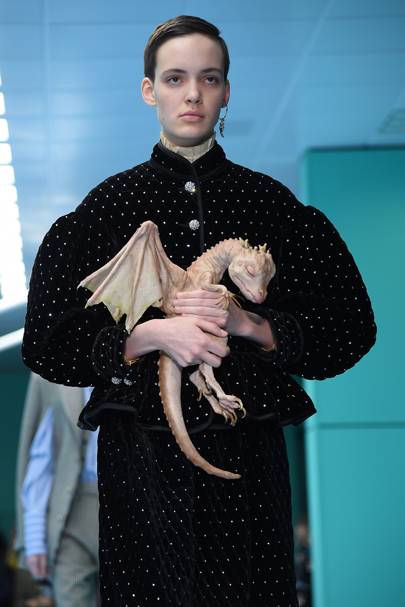 Thought you needed a new Gucci beaded clutch to complete your quilted velvet evening look? Think again! A "dragon's puppy" is all that's required this autumn.

Elizabeth II might not have been in attendance at Gucci, instead favouring the front row at LFW rising star Richard Quinn, but that doesn't mean HM didn't make her presence felt. In a trend we've seen elsewhere this week, Gucci's floral foulards were secured at the chin, but featured swinging diamante chains and crystals. Guess this is how Princess Margaret would have worked it. 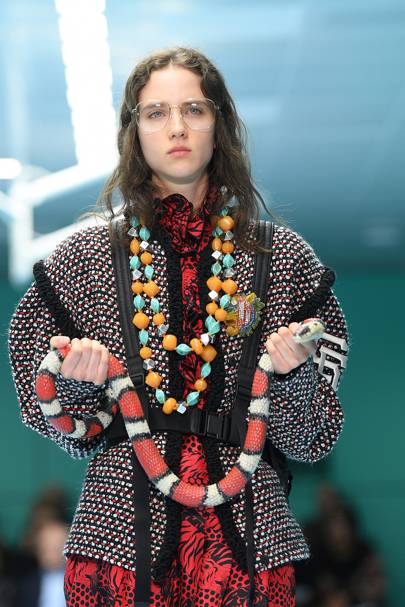 Michele has made snakes talismanic emblems of the house of Gucci - his autumn/winter 2017 collection's show notes referenced the Ouroboros, the ancient Egyptian symbol of a snake eating its own tail, which points to infinity. Now he's literalised the notion with a snake as a pet. Time to get over your phobia. 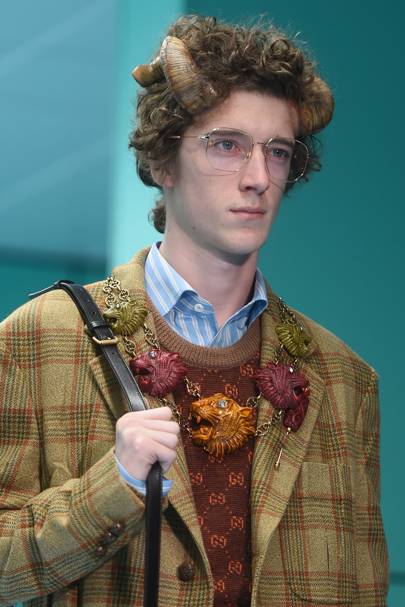 All Horns And Rattles

Hello, horns. Faun's horns, to be precise, and the only thing that should be peeping out from beneath your carefully tousled locks. Previously only revered for his red knitted scarf, Mr. Tumnus takes centre stage as your autumnal muse. 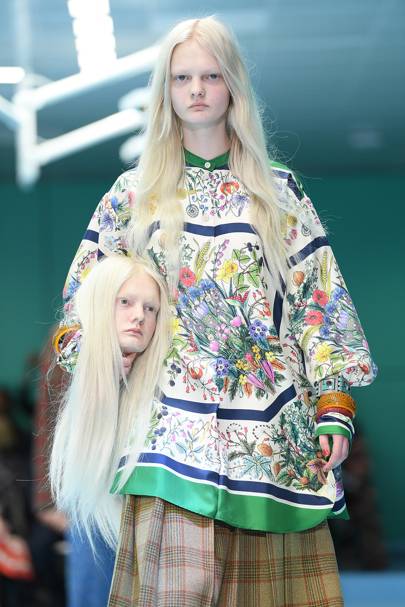 In the most disturbing manifestation of the "cyborg" concept, Michele sent models holding mock-ups of their own heads down the runway. It was a twisted take on the cephalophore, a saint who is depicted carrying his own head, which is a nice word to drop into conversation every now and again. 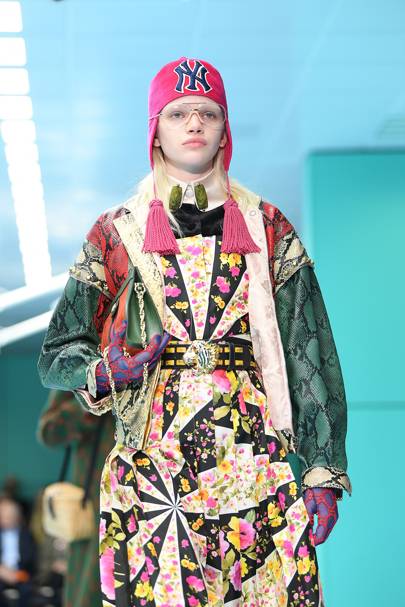 Michele is so wedded to his ratty old NY Yankees baseball cap that for pre-fall, and now autumn, he decided to partner with Major League Baseball on a line of accessories and clothing. Beanies and caps came with the famed NY logo, which also found its way on to pockets. Head to the Bronx for the budget version. 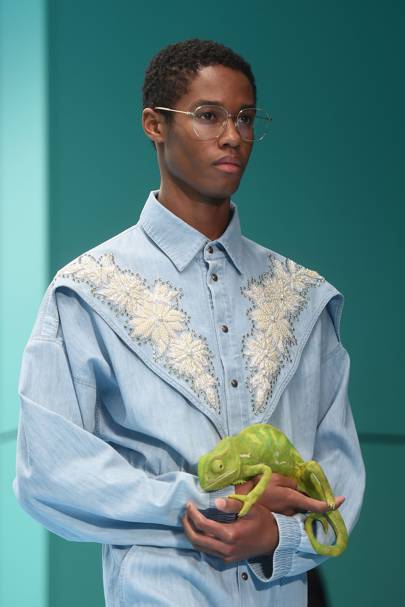 Snakes too slithery, and dragon puppies too hazardous? Try the humble chameleon. As companion accessories go, an Old World Lizard is a useful acquisition: they can shift colour to match your outfit, so you need never worry about clashing again.

Posted by FASHIONmode News at 3:11 PM