Burberry  has announced that Christopher Bailey's final collection will be a celebration of LGBTQ+ communities.

Presented on February 17 at London Fashion Week, the autumn/winter 2018 collection will use the colours of the LGBTQ+ emblem in a new rainbow check. The optimistic iterations of Burberry's signature motif will follow the same see-now-buy-now model instigated by Bailey in September 2016, and be available for purchase immediately after the show.

The brand's support to LGBTQ+ communities will extend beyond clothing - and Bailey's departure date on March 31 - with a series of initiatives. The first of which has seen Burberry make donations to the Albert Kennedy Trust, the Trevor Project and ILGA, organisations which all aim to raise the voices of and mobilise LGBTQ+ communities. 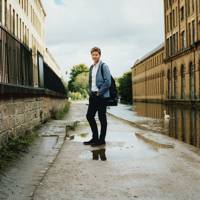 "My final collection here at Burberry is dedicated to - and in support of - some of the best and brightest organisations supporting LGBTQ+ youth around the world," said Bailey of his last project at the house. "There has never been a more important time to say that in our diversity lies our strength, and our creativity."

In an example of how the brand's support will benefit the communities, Tim Sigsworth MBE, chief executive of the Albert Kennedy Trust, said: "Twenty-four per cent of the 150,000 young people facing homelessness in the UK identify as LGBT+ after experiencing abuse and rejection just for being brave enough to come out to their families. Burberry's donation will support our ongoing work to provide safe homes and support to young people, grow our youth engagement programme and fund our plans to bring AKT to more cities to reach the most vulnerable people across the country."

Though Bailey will step down from the board at the end of March, he will continue to provide support to chief executive officer Marco Gobbetti and the team until the end of the year. Burberry has not announced his successor yet.

Posted by FASHIONmode News at 4:55 PM