Dior sets are always a spectacle, but for autumn/winter 2018, Maria Grazia Chiuri is returning to the Musée Rodin with a statement: the set for the latest collection comprises an eye-catching collage of 3,000 posters.

Conceived by set designer and frequent Dior collaborator Alexandre de Betak, the backdrop takes its cue from the autumn collection, the unveiling of which coincides with the 50th anniversary of the protests that shook Paris in May 1968. The series of strikes proved to be a turning point in France, igniting a deeper conversation about society and its values. 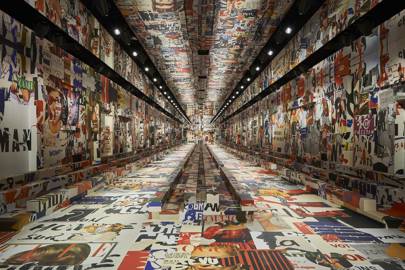 It took 150 people three weeks to build the set: covering the double runway - seats, walls and all - with posters inspired by that urgent anti-authoritarian spirit of 1968. An expansive mirrored ceiling reflects the cacophony of visuals beneath: fragments of feminist slogans, vintage magazine covers - British and American Vogue included - and archival protest images, patched together as a collage of insurgence, reinvention and strength. Through the commotion, one poster stands out, black writing on a white backdrop at the end of the runway: “I AM A WOMAN.”

All of which serves to ignite a guessing game: what will the clothes look like? Our money’s on more berets, mini skirts and a load of slogan T-shirts…

Posted by FASHIONmode News at 4:01 PM