Anok Yai recently made fashion history by becoming the first black model to open a Prada show since Vogue contributing editor Naomi Campbell in 1997. Her second turn on the catwalk for Prada - she made her first at the menswear show in January - the 19-year-old knows the important message her casting projected to the industry.

"It was an honour and I'm proud that I was the one chosen to open, but this is bigger than me. Me opening for one of the top fashion houses is a statement to the world - especially for black women - that their beauty is something that deserves to be celebrated," she told Vogue of the moment.

With Vogue contributing casting director Ashley Brokaw heading up the model booking for the Italian house, the brand has built a reputation for quickly tapping fashion's rising stars with a Prada global exclusive (where a model will only walk for one brand in a season) becoming a rite of passage for many.

"The Prada campaign was my first ever job in fashion - I was booked by the incredible Ashley Brokaw and flew to LA to shoot with Willy Vanderperre," Yai explains of her entry into the fold. "Casting for Prada this season was so quick and simple. I had a few digitals taken and then I walked. It only lasted a few minutes, but it was nerve racking since there was such a short amount of time to make a good impression."

"I will remember the experience of opening the show as my breakthrough moment. Just modelling for Prada alone is a huge opportunity and the fact that Miuccia and Ashley put me front and centre sets the tone for my career." Yai currently has two Prada shows and three campaigns sitting pretty on her CV. "I am just so excited about where this will take me, and I couldn't be happier." 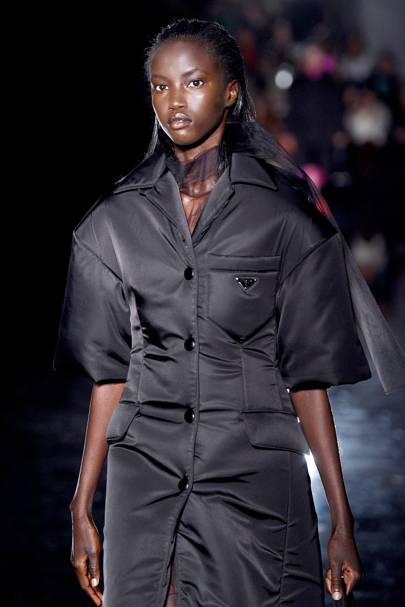 Being confirmed to walk, let alone open, is not decided by Miuccia Prada, who she calls “sweet-yet-strong”, until the last minute. As Yai explained: "I only found out I was going to be opening about an hour before it started. When I was backstage, I noticed that the production team was really going crazy about making sure my hair and make-up was done, but I didn't really think anything of it. Before we all changed into our looks, the production team had me do a walk-through of the runway for a third time. I asked her why I was the only one doing it and that's when I was told I was opening. I was pretty anxious before walking but the second I got on the catwalk all the nerves went away."

Scouted at Howard University during homecoming celebrations in Washington DC, the Egypt-born, Sudanese teen who grew up in the US was soon snapped up by Next Models and her long-time dream became a reality.

"I had always wanted to be model, but I was very hesitant. I wasn't sure how well I would do in the industry because it's always changing. Now, I want to become the best model I can be and take my career as far as possible," she added. "However, I'm also passionate about making an impact in the world whether it be through art and fashion, social media, or science."

Yai opening for Prada will not only be a landmark in her own career, but for the industry too. Previously, Prada has been called out for its lack of diversity with no models of colour taking to the catwalk between Naomi Campbell (1997) and Jourdan Dunn (2008).
Posted by FASHIONmode News at 3:43 PM