The Return Of John Galliano

CAN we expect a television appearance from John Galliano in the near future? The designer is said to be considering a tell-all interview on US talk show Charlie Rose - a programme known for featuring leading politicians, actresses, writers, musicians and leaders, from Bill and Hilary Clinton to Leonardo DiCaprio, Dolly Parton and Hunter S Thompson.

Galliano's publicist, Liz Rosenberg, has thus far denied the claims telling WWD that "there are no plans in place regarding TV appearances for John at this time." Executive producer for the show, Yvette Vega, said that nothing had been confirmed, but didn't rule out a future interview with the designer. 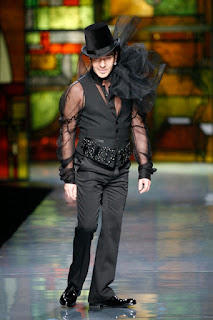 "We are open to interviewing people whose views represent a wide range of opinions, from Bashar al-Assad to Bono," she said.

Galliano has already given Vanity Fair an exclusive interview for its July issue, available to buy on June 7.