Is David Beckham Launching His Own Menswear Label?

We don't know. But we hope so. With news of David Beckham´s retirement rocking the nation, nay, the world, speculation has been rife with suggestions as to what this could possibly mean for brand Beckham - and what the soon-to-be-former footballer will do with all that spare time.

While a lucrative five-year contract as an ambassador for Sky has already been confirmed (so he'll still be a fixture in the sporting world), we're more interested in what the fashion future may hold for the 38-year-old. A spokesperson on behalf of Beckham's management hinted at new projects on the horizon. 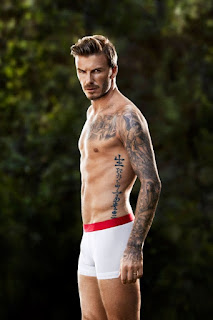 "Over the next year, we will see his business grow and expand. The sky is the limit really, in terms of what he can do globally," they told WWD. "Just look at what Victoria [Beckham] has done." A representative from H&M confirmed to us this morning that he will continue to work with the high street retailer on his popular bodywear line - with a new range set to launch later this year.

"David Beckham is a great sportsman and a great style icon, and to us that is how he will be looked upon also in the future," they told us. "We are very happy with the collaboration and look forward to launching the new collection this autumn."

No stranger to an endorsement, Beckham has appeared in campaigns for numerous companies throughout his 20-year career, including Emporio Armani, Breitling, Adidas, Police, Gilette, Samsung and Pepsi - allowing him to amass a wealth of over £165 million, making him one of the world's highest-paid athletes. We doubt the barrage of offers will start to wane any time soon - branding experts have predicted that his fortune will actually increase more rapidly post-retirement, with more time to focus on commercial opportunities.

Victoria Beckham  released a statement yesterday, paying tribute to her husband of 14 years:

"The children and I are so proud of David, it's been an incredible journey for us all as we have watched him play at clubs all over the world throughout the last 15 years. Myself and the children have cheered him from the stands, as he has held high trophies with his teams at Manchester United, Real Madrid, AC Milan, LA Galaxy and Paris St Germain," she said. "This was not an easy decision to make, and to me and the children he will always be an amazing sportsman and a devoted husband and father. He is, and will always remain, a true ambassador for sport and is not just an inspiration to myself and our children but for millions of people worldwide. We are all excited about the next chapter in our lives and the adventures we will explore as a family."

So, on the subject of exploring new ventures as a family, what would be better than a collaboration between husband and wife? We'd love to see David make his mark in the high-fashion industry and work on a menswear side-line for the ever-expanding Victoria Beckham empire. It wouldn't be the first time that the husband-and-wife duo have worked together (who can forget those his-and-hers Armani Underwear adverts?), and we know from his work with H&M that he has an interest in design. Or perhaps he'll make his long-awaited catwalk debut? While the aesthetically-pleasing star has featured in many an editorial shoot, we've yet to see him appear on a runway. (Dolce and Gabbana once credited him for revolutionising menswear - so our money is on them.)

Or, just maybe, we'll be treated to some David Beckham sportswear - for which his ongoing partnership with Adidas would serve as the perfect springboard.

Who knows what the future holds for brand [David] Beckham - chances are, it'll be none of the above - but whatever the outcome, we'll be watching with keen interest.

Posted by FASHIONmode News at 10:28 AM