Shoppers  could soon be treated to a second Calvin Klein Collection  high street collaboration. Womenswear creative director Francisco Costa  has hinted that he's working on a partnership to be debuted in the near future.

The designer recently collaborated with US department store Macy´son a limited edition capsule collection - a first for the New York-based label - and it seems that Costa's caught the collaboration bug.

"I just did this line for Macy's," he said. "I'm in the process of doing another line for somebody else, with another company, through Calvin."

Intriguing. The designer also went on to talk about some of his most high-profile clients and dressing Katie Holmes for the recent Met ball - who, he revealed, opted for a last-minute dress swap before the big event.

"[Katie Holmes] had fitted the dress, loved the dress and I said, at the last minute, that I had another dress I'd like to try. She says, 'Oh my God, I like this dress better,' and she really brightened up," explained Costa. "So I said, 'That's the one we have to go with'. The original dress was beautiful, very much like the spring collection that's in the [Costume Institute] exhibition - it's a beautiful bustier, deep green with a peplum and separate skirt."

Renowned for his chic simplicity and minimal approach to design, it perhaps comes as little surprise that Costa didn't take too much notice of the ball's punk theme. 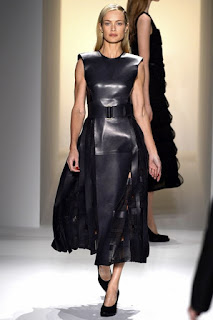 The Brazilian designer also revealed that his favourite red carpet moment of all time (and there have been a lot of them): dressing Jennifer Lawrence for her first Oscars appearance in 2011. The actress was nominated for Best Actress for her role in Winter's Bone.

"I think Jennifer was amazing just for the fact that she came out of nowhere and her image was so different that how she had been portrayed and it made such a statement - I thought she was so beautiful," he told Fashionista. "Everything worked, the hair, everything was amazing."

Posted by FASHIONmode News at 10:41 AM