Lily Cole has made her first foray into jewellery design, creating a line of pendants, rings and bracelets. The collection, launched today in partnership with stylistpick.com, is made using Amazonian wild rubber.

The model was approached by Sky Rainforest Rescue last year with the offer of visiting Brazil to experience wild rubber tapping. The idea of creating a fashion collection from the raw material soon followed, something which appealed to Cole's interest in finding trade as opposed to aid solutions for global climate issues.

"For me, the collection is a metaphor of what is possible. I hope we can use the material in many other products in the future," she told us. "Jewellery is also a good way of communicating the value and delicacy of the rainforest it represents. Wearing it against skin can connect us with a place and a dialogue that is seemingly far away."

The 25-year-old was involved with entire design process, from the initial rubber-tapping through to final production. The jewellery's aesthetic was inspired by an old pendant she owns from Africa, which contained a prayer encased inside metal.

"In this instance, the rubber itself became the prayer," she explained. "I wanted the jewellery to feel valuable but also vulnerable - as a metaphor for the rainforest. I wanted it to be something people would both love and treat delicately. I am more interested in the story behind the objects than the process of design itself, but design is an inherent part of a lot of what I do, and important for communicating ideas." 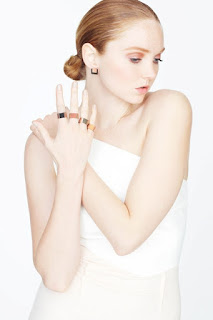 Sky Rainforest Rescue is an initiative helmed by Sky and WWF, with the aim of saving a billion trees in the Amazon rainforest - and of which the model is an ambassador. Cole also enlisted fervent climate campaigner Vivienne Westwood to join the project, who designed a dress using the same wild rubber - which Cole wore to the recent Met ball.

"I am excited to explore the rubber industry as a vehicle for green economics, which, if scaled, I see as offering real hope to the rainforest," explained Cole. "I like the green economic approach of this specific Sky Rainforest Rescue initiative, and am excited to see what can be done in the future to create long-term structural change."

Posted by FASHIONmode News at 12:03 PM