What does one wear to a Wall Street-themed party? Such was the wardrobe conundrum that Kim Kardashian West faced when she attended the recent celebrations of a friend who had sold her company for a large sum and wished to celebrate in all-out baller style.

And so, Kardashian West wore dollars. From head to toe. She sourced a trench coat from Jeremy Scott’s autumn/winter 2001 collection, and a pair of thigh-hugging spring/summer 2018 Balenciaga boots printed with the same motif of one dollar bills piled high. What a coincidence!

To fill her 118 million followers in on this convergence of designer prints, the reality TV star turned Diet Prada on us, and identified that, yes, Balenciaga appears to have reimagined Scott’s money collection without seemingly collaborating with or crediting the American designer. “Reimagined” being a cloaked word for copying. 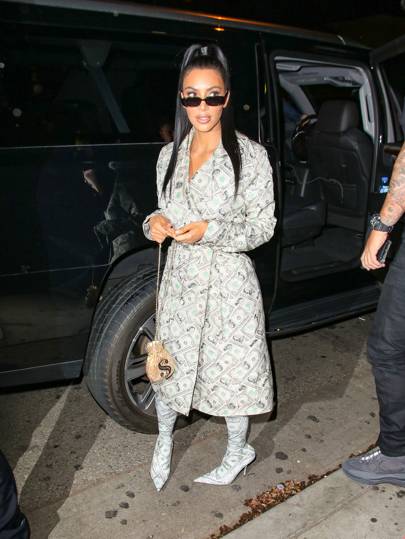 Indeed, @dietprada, the acerbic Instagram account that calls out knockoffs and other injustices in fashion, gave Kardashian West a shout out on Stories. “Here for Professor Kim’s fashion history 101,” founders Tony Liu and Lindsey Schuyler quipped.

Kudos to Kim, who we know is a big fan of Demna Gvasalia’s work at Balenciaga. But she’s been quietly flexing her knowledge of fashion history for some time. Remember the Gucci g-string that she modelled during her neon phase this summer? The naughty logo-ed undergarment originally turned heads when Tom Ford sent it down the catwalk with just shoes, sunglasses and a watch, as part of his Gucci spring/summer 1997 collection. Kardashian West managed to source one some 21 years later to post on Instagram and amass over two-million likes. Snap.

Somewhere between these double Gs and the vintage Versace dresses she's been favouring of late, Kardashian West turned into a budding fashion authority – and it suits her. There’s not many women who can pull off an outfit crafted entirely out of dollars – her pouch is by Judith Leiber, FYI – to prove a point. And for that we salute her.

Posted by FASHIONmode News at 4:09 PM