The Met 2019 Exhibition And Gala Theme Has Just Been Revealed: "Camp: Notes On Fashion"

This is the moment of the great unveiling: The Metropolitan Museum of Art Costume Institute’s spring 2019 exhibition will be “Camp: Notes on Fashion”, from May 9 to September 8, 2019. Andrew Bolton, curator in charge of the Costume Institute, has framed the exhibition around Susan Sontag’s seminal 1964 essay Notes on "Camp", which posited different ways in which the concept could be construed. Bolton explains that he found Sontag’s writings — in a nutshell, she argued that camp is the “love of the unnatural: of artifice and exaggeration... style at the expense of content... the triumph of the epicene style” — so timely with what we are going through culturally and politically that, “I felt it would have a lot of cultural resonance.”

Sontag found camp, for instance, in Busby Berkeley movies and in the he-man actor Victor Mature, in Mae West and General de Gaulle, in Swan Lake, Flash Gordon comics, Caravaggio, Chinoiserie, and the entirety of the Art Nouveau movement. “Camp taste has an affinity for certain arts rather than others,” she noted. “Clothes, furniture, all the elements of visual décor, for instance, make up a large part of camp.” Camp, as Bolton notes, “has become increasingly more mainstream in its pluralities — political camp, queer camp, pop camp, the conflation of high and low, the idea that there is no such thing as originality.” Camp, he continues, has been described as style without content. “But I think you’ve got to be incredibly sophisticated to understand camp — look at Yves Saint Laurent and Marc Jacobs.”

The exhibition, which will be presented in The Met Fifth Avenue’s Iris and B Gerald Cantor Exhibition Hall, is made possible by Gucci. For Gucci’s creative director Alessandro Michele, Sontag’s essay, “perfectly expresses what camp truly means to me: the unique ability of combining high art and pop culture.” No one growing up on a diet of Italian television and pop stars such as Mina, Patty Pravo, and Raffaella Carrà in the 1980s could be a stranger to the concept of camp, which Bolton also points out embraces elements that include “irony, humour, parody, pastiche, artifice, theatricality, excess, extravagance, nostalgia, and exaggeration” — all of which can, by turns, be discovered in Michele’s playful Gucci oeuvre. As The Metropolitan’s director Max Hollein notes, “camp’s disruptive nature and subversion of modern aesthetic values has often been trivialised, but this exhibition will reveal its profound influence on both high art and popular culture.”

Bolton has traced the word itself back to the French verb se camper, meaning to strike an exaggerated pose, and its origins in the flamboyant posturings of the French court under Louis XIV. The Sun King himself consolidated his power by compelling the French nobility to abandon their country strongholds and to gather at Versailles, the glittering showplace that he had built a suitable distance from Paris, where the elaborate protocol and demands of dress forced them to squander vast sums literally to keep up appearances. The king ordered elaborate court ballets that required complex costuming, and established complex faux military camp cities made from canvas in which he and his courtiers paraded in yet more lavish ensembles. At Versailles, everything was pose and performance.

Louis XIV’s effeminate brother Philippe I, Duke of Orleans, meanwhile, who was deliberately raised in such a way that he would never prove a threat to his brother’s rule, (as were many testosterone-charged siblings had in France’s belligerent history), was in many ways the paradigm of camp. A dance manual of the period records the king’s stately dance steps as well as his brother’s own extravagantly bold movements. Monsieur, as Philippe was formally known, was obsessed with clothing and jewellery, besotted with his pretty male favourites, and disinterested in his second wife, the plain looking, plain speaking German-born Princess Elizabeth Charlotte, Madame Palatine (known as Liselotte), who has thankfully left us her unvarnished memoirs of court life and the “flibbertigibbet” to whom she was married. Monsieur managed to sire two children, with the aid, as his wife drolly noted, of "rosaries and holy medals draped in the appropriate places to perform the necessary act." 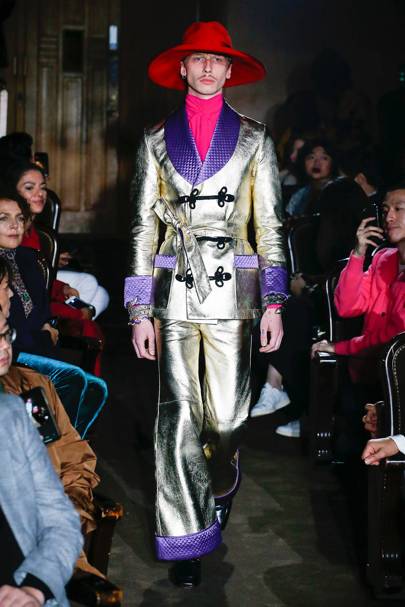 Aristocratic Bolton is including a Roman sculpture of a young Hercules from the museum’s collection in his exhibition to illustrate the beau ideal of the classical pose — contrapposto, hand on hip — that became the default aristocratic stance in Versailles, as practiced by the king himself in a 1701 swagger portrait by Hyacinthe Rigaud that depicts him in his magnificently camp coronation robes, his calves set off by white silk stockings and his white shoes with high red heels. (Bolton will include a rare extant pair of these shoes, from the collection of Boston’s Museum of Fine Arts, in the exhibition).

Italians, meanwhile, adopted the idea of sprezzatura, or studied nonchalance that became the attitude favored by the influential taste-making dandies of early 19th Century England. For Bolton, the first mention of camp appears to have been in a letter dated 1869, sent by Lord Arthur Clinton to his lover Frederick Park, a cross-dresser known as Fanny. “My campish undertakings are not at present meeting with the success they deserve,” Lord Clinton notes. “Whatever I do seems to get me into hot water.” Fanny and his partner in cross-dressing, Ernest Bolton (known as Stella) were indeed sent to the courts for gross indecency but ultimately cleared of wrongdoing, to the delight of the crowds. Their story – documented in Neil McKenna’s riveting 2013 book Fanny and Stella — inspired Erdem Moralioglu so much that he based his recent spring 2019 collection on them, including trans beauties in his runway casting.

Oscar Wilde built his career on camp posturings. His epigrams, for instance — “One should either be a work of art, or wear a work of art” — are the essence of camp. But after his terrible fall from grace (beautifully documented in Rupert Everett’s new movie The Happy Prince), these attitudes were rendered suspect and forced underground. A 1909 book of Victorian slang explicitly describes camp as “actions and gestures of exaggerated emphasis used chiefly by persons of exceptional want of character.” The word gained currency in the early 20th Century worlds of fashion and the marginalised queer world at a time when homosexuality was a criminal offence and subtle signals and a coded slang language called Polari were all discreet signifiers of queerness along with such sartorial details as a green carnation in a buttonhole, brown suede shoes, overly tight clothing, and — wait for it Mr President — a red tie.

Later in the 20th Century Andy Warhol, the ultimate camp pop icon, co-opted Sontag’s essays for his 1965 movie Camp, (he even screen-tested the writer), and the Stonewall Riots of 1969 ushered in a newly open embrace of camp in fashion and culture. For Bolton, one key aspect of camp is the idea of “failed seriousness — not consciously trying to be camp.” He cites Charles James’s elaborately constructed ballgowns and the work of the very serious Spanish couturier Cristobal Balenciaga, particularly with his game-changing 1957 baby doll dress, as well as an evening dress worn by the museum’s benefactor Jayne Wrightsman in 1966 sewn with tendrils of pink ostrich feathers that flutter in movement.

The co-chairs for the Gala on Monday, May 6 will be Lady Gaga, Alessandro Michele, Harry Styles, Serena Williams, and Anna Wintour. But what to wear? Dietrich and Garland were camp, as are Cher and Elton John, and Bolton mentions the idea of “surplus — when things are too much” as a keynote of camp. “A bow that’s too big,” he says, “too many feathers, too many sequins.” For Bolton, Virgil Abloh’s little black dress printed with the legend “Little Black Dress” in quotation marks is camp, and follows in the camp tradition of such designers as Franco Moschino (and Jeremy Scott for Moschino), Jean Paul Gaultier, Jean-Charles de Castelbajac, John Galliano, and Thom Browne. New generation designers like London’s Molly Goddard, Richard Quinn, and Matty Bovan, and New York’s Vaquera and Gypsy Sport’s Rio Uribe also trade in camp ideas. Bolton is on a roll. “Chanel was camp as a person but her clothes weren’t camp,” he explains, “whereas Schiaparelli was camp as a person and so were her clothes. You end up seeing camp everywhere!” The 2019 Met Gala will take place on Monday, May 6th at the Metropolitan Museum of Art in New York.