Does London really need a new shopping district? Yes, Argent, the developer of the major new Kings Cross retail development, Coal Drops Yard, believes it does. Take one look at the glossy pictures of the space, in which Heatherwick Studio has fused contemporary design elements with vestiges of the past, and you’ll be inclined to agree.

First things first: why Kings Cross? Argent had no desire to piggyback on the success of Granary Square after Central Saint Martins set up camp there in 2011. Rather, its plans were laid out back in 2000. “We have always envisaged Kings Cross as a microcosm of the city,” Anna Strongman, partner at Argent, tells Vogue exclusively of the project. “The Victorian buildings of the coal drops seemed the perfect place to create something special.”

Within the surviving brick viaducts and rich ironwork of the site, which was originally established in 1850 to handle the eight million tonnes of coal delivered to London each year, sit an eclectic mix of 50 concept stores, bars, restaurants and public spaces available for workshops and talks. “There aren’t many places where you find a Margaret Howell store directly next door to a brand that’s opening its first ever shop,” Strongman continues. “Our research showed that people want that feeling of serendipity, and love places which retain a sense of discovery.” 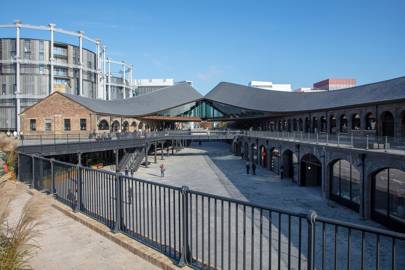 Central to Argent’s mission was signing brands that wanted to be part of a community of shopkeepers. Paul Smith, Cos, Aesop, Tom Dixon and Cubitts were all chosen for their progressive outlook on driving the site forward as a tech, culture and creative hub, and the fact that customer interaction was not purely transactional for them.

“There’s also a real focus on sustainable consumption, and a more careful approach to what consumers are willing to spend their money on, a shift towards quality and craftsmanship over volume and bargains,” Strongman adds of Thomas Heatherwick's massive heritage refurbishment and restoration effort to make the site green. Each eatery, including Rita’s Bodega and Barrafina, is linked to a heating and cooling system that powers the entire N1C postcode to prevent the site over-using energy.

“We don’t think there is anything like Coal Drops Yard in London already,” Strongman shares. “Everything we have done at Kings Cross shows that if you invest in high quality architecture and public spaces – and work in partnership with brands – then people will come.” Argent’s research into the forward-looking shopping districts in Paris, Milan, Scandinavia and the east and west coasts of the US, allowed the company to formulate a mission statement – “to have an independent spirit, to offer something special in return for a customer’s time, and to delight visitors and passers-by” – but Coal Drops Yard had an edge from the very beginning: a strong heritage to pique customer interest on its own.

Posted by FASHIONmode News at 5:13 PM