Tickets For The Fashion Awards 2018 Go On Sale

Pre-sale tickets for the Fashion Awards 2018 in partnership with Swarovski go on sale today, June 27, for customers of American Express, the official credit card of the Fashion Awards. The general sale starts on July 2nd on Fashionawards.com.

Each £50 ticket includes a circle level seat at the Royal Albert Hall ceremony, which will take place on December 10. Box seats are also available for a more exclusive ticket package. Proceeds will go towards the British Fashion Council’s charitable initiatives, educational programmes, scholarships, and financial and mentoring schemes for emerging talent. 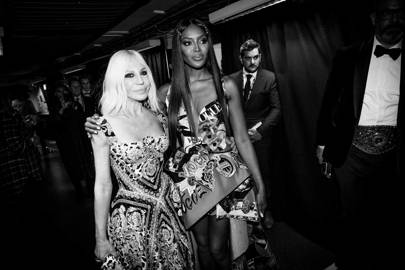 Though few details are known about this year’s event, nominees and winners will be voted for over the coming months by an international judging panel of over 2,000 key industry figures. As well as the nominees, the special recognition awards will be announced prior to the ceremony, in acknowledgement of the weight of the achievements they represent.

Last year’s Swarovski-crystal-studded event was hosted by Karlie Kloss and Jack Whitehall, with official red-carpet commentary by Derek Blasberg and Miss Piggy. As well as honouring past, present and future excellence within the international fashion industry – including Naomi Campbell’s moving tribute to her late "Papa", Azzedine Alaïa, and Maria Grazia Chiuri commendation of Franca Sozzani – the Fashion Awards supported the BFC’s pledge in 2016 to raise £10 million in 10 years to educate talented young people.

Posted by FASHIONmode News at 1:20 PM