Since the rise of Alessandro Michele some three years ago, street style has been an integral part of Gucci. Only, the Roman designer’s multi-faceted work isn’t rooted in the peacocks and posers you see outside fashion shows – even if that segment has now adopted his graphic aesthetic, too – but in authentic street style: the historical and contemporary characters of Italy and beyond, whom Michele grew up admiring in paintings and on the street. For his most recent capsule project, he called upon the young London-based illustrator Isabella Cotier in a meeting of likeminded everyday spectators. “I was working on a people-watching project in Florence, and he said, ‘Would you like to collaborate?’” Cotier recalled on Tuesday afternoon at the Gucci Garden in Florence where her illustrations now grace T-shirts and bags in the brilliant Gucci Garden gift shop, which opened last January. 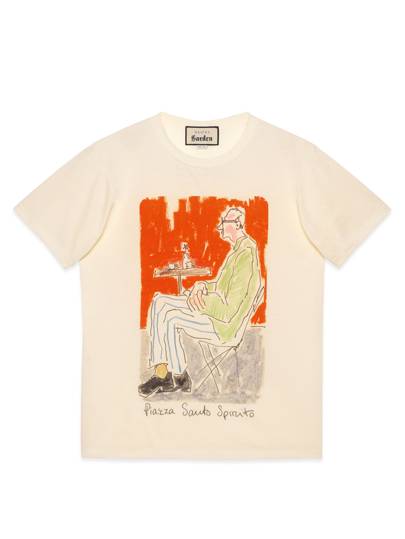 “I grew up in Florence and lived here for 12 years, so I come back very often. I was in this café in Santo Spirito and I saw this little old lady with this massive fur coat and hat. I thought, she’s amazing! Then, she started dancing. My friends introduced me. Her name was Florin. She was an ex-ballerina,” Cotier reminisced, explaining the early beginnings of her project with Michele. “And so, I started collecting these Florentine characters from different places like Sant’Ambrogio Market. There are some serious characters.” In a series of illustrations that sit perfectly within Michele’s colourful Gucci-verse, Cotier drew the eccentric and flamboyant pensioners indigenous to Florence.

“Some are exaggerated, some are real,” she noted, but you only have to venture a little off-piste in the Renaissance jungle that is Florence to discover these exotic creatures. “It’s so unique to Florence. They go out and they’re loose enough to feel like they’re not being observed. That’s what I really love: the lack of being self-conscious,” Cotier reflected. “These days, with social media and stuff, people are so aware of their identities and appearances. The older generation is like, ‘Why do you care?’” 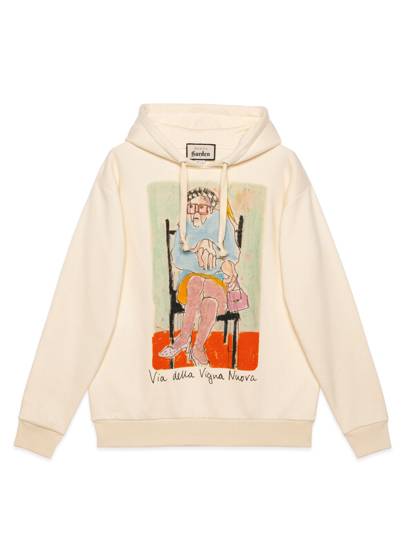 Mirrored against the ambitious and often artificial street style scene that’s become an industry within fashion, Cotier’s collaboration with Gucci re-focuses the spotlight on those to whom self-expression is an unconscious and instinctive daily routine. As the illustrator said, “I think you can just tell so much when someone is wanting to be looked at and when someone isn’t wanting to be looked at; when someone isn’t asking to be admired. I think it’s to do with age and being free. They get up in the morning and think, ‘I wanna wear this hat because I wanna wear it,’ or, ‘I wanna go out with a banana beside my coffee because that’s what I feel like.’ Not: ‘Maybe this will get me photographed today.’”

Posted by FASHIONmode News at 4:31 PM