The Duchess Of Sussex's Prada Moment

Since Meghan Markle married Prince Harry and became the Duchess of Sussex, she has had the world’s gaze upon her. Every outfit for every outing is studied, as she slowly establishes her place in the royal family, and her personal style.

Last night, she joined her new husband at Buckingham Palace for the Queen’s Young Leaders Awards, where young people from around the Commonwealth are honoured for their services to education and mental-health care. For the occasion, she wore a blush double-breasted Prada suit with an asymmetric skirt, a black Prada clutch and Aquazzura Deneuve pumps.

The decision to wear the Italian label is a shift away from the Clare Waight Keller for Givenchy pieces the Duchess has largely been favouring for formal occasions since her wedding day. She developed a close bond with the British designer over the months they collaborated together on her bespoke gown, and sees Waight Keller as a hand to hold as she defines herself the coming months. 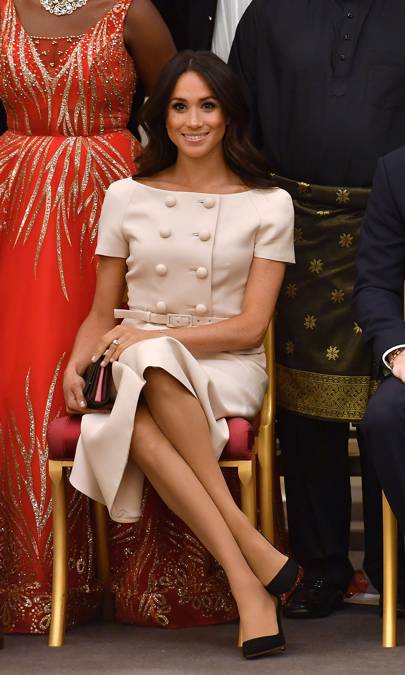 The Prada two-piece is by no means adventurous in colour, but might suggest the Duchess is gaining the confidence to veer away from her seemingly strict cream palette. An under-the-radar appearance at the wedding of Prince Harry's cousin, Celia McCorquodale to George Woodhouse in Lincolnshire last week, also saw a sartorial departure. She wore a blue-and-white floral Oscar de la Renta maxi dress – a far cry from the neatly tailored persona she presents at state occasions.

Miuccia Prada is a key player in the fashion industry, so the Duchess’s choice sparks hope that she might continue to fly the flag for revolutionary designers who excite the fashion pack. The Duchess has dabbled with Prada bags before, and attended the brand’s Iconoclasts party in 2015, but this is her first Prada makeover as a member of the royal family. It might only be a blush suit, but she’s making strides in the right direction.

Posted by FASHIONmode News at 1:18 PM