The Tunisian-born couturier Azzedine Alaïa has died in Paris at the reported age of 82. The Sphinx-like designer, once dubbed "the King of Cling", was highly revered for his garments that moulded the body into extraordinary proportions, the product of an obsessive craftsman who bears more resemblance to a sculptor than a fashion designer. A spokesperson confirmed he suffered a heart attack in Paris on Saturday.

"Azzedine Alaïa was a true visionary, and a remarkable man. He will be deeply missed by all of those who knew and loved him, as well as by the women around the world who wore his clothes," said Vogue editor-in-chief Edward Enninful. "The generosity of his spirit and genius of his designs will never be forgotten."

Born in Tunis in around 1940 to wheat farmers (ever mischievous, this date is unconfirmed: he frequently lied about his age), Alaïa was an early devotee to Vogue and wormed his way into the local Institut Supérieur des Beaux Arts in Tunis to study sculpture. He noted that "when I realised I couldn't be an amazing sculptor, I changed direction" - segueing into fashion. He began assisting a dress-maker and, having built up a private client base, he moved to Paris in 1957. He soon got a job at Christian Dior, in the midst of the Algerian war, but was dismissed for having incorrect immigration papers after five days. 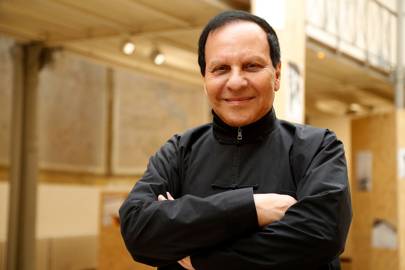 From Dior he went to Guy Laroche, where he spent two seasons, then to Thierry Mugler, but a series of high-society patrons allowed him to set up his own workshop. Elegant swans such as the Comtesse de Blégiers offered him lodgings in exchange for dress-making and babysitting. In 1979 he opened his own atelier, a flame for Hollywood stars such as Greta Garbo and the Seventies jet-set, which included Marie-Hélène de Rothschild, who came regularly for fittings.

He produced his first ready-to-wear collection in 1980, in conjunction with a move to a studio in the Marais. It was a smash hit: moulded in leather, it was as erotically charged as it was ground-breaking. Alaïa moulded women's bodies into the best versions possible using a needle and thread. He dismissed exterior embellishment for internal rigour, creating perfectly fitted dresses that celebrated the female form.

Over the years he continued to create collections to the beat of his own drum, eschewing the traditional seasonal calendars, from which he retired in 1992 and indeed any form of timeframe: at his unpublicised catwalk shows, held according to his wont, he would keep audiences waiting for hours. “When the collection is ready, it’s ready,” was Alaïa’s attitude. "Unless I have a length of fabric in my hand and a girl in front of me, I really can't come up with a lot of ideas." He showed a surprise couture collection in July, his first since 2011, in which Naomi Campbell made a rare catwalk appearance to rapturous reviews.

Posted by FASHIONmode News at 1:16 PM