Erdem Moralıoğlu's highly anticipated collection lands in H&M this week - November 2, at selected stores and online; read everything you need to know about the Erdem x H&M launchhere - but what is the secret behind the success of the collaboration? Why do we all want it so much and how did Erdem and H&M make it so? Voguecaught up with the designer in Los Angeles ahead of the star-studded launch party to find out.

"I think the moment you get too caught up in thinking about how a collection will be perceived - there's no point; you really have to approach it as a new body of work," he said referring to the weight of expectation that accompanies a collaboration of such international stature.

A new body of work then, but destined for the the high street - and at a very different price point to his usual stock. Did that change his approach? "Erdem was very involved with everything from day one," said Ann-Sofie Johansson, H&M’s creative advisor. "He knows what he wants and is very engaged with the process. He also introduced us to a number of new producers; smaller Scottish mills and Italian mills he regularly works with," she explained, signalling a very different approach from the get-go.

That, in a nutshell, is what has made this, H&M's 17th designer collaboration, such a hit. At its very core, it is a subversive collection that need not be radical to create change, nor indeed pushed to the point of parody to make a statement. Instead, it effortlessly celebrates the principles it was built upon: beauty, elegance, fluidity and strength. 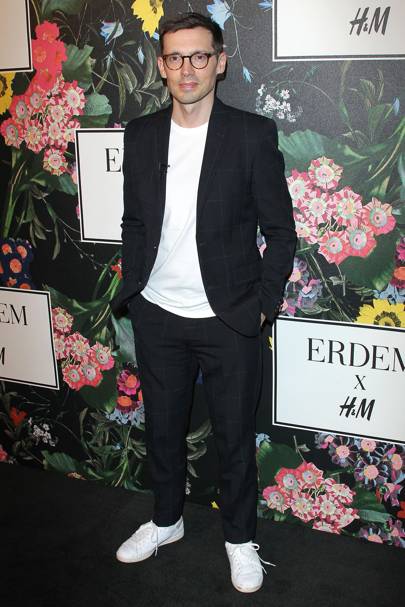 "Growing up with a twin - with someone who was the same as me, but of the opposite sex - I never, ever, equated something that was feminine as something that was weak; it was always equal, or the same," Erdem said reflecting on his childhood and sister Sara, who wears his designs often and always provides honest feedback.

That idea of firsthand experience with a garment fed into his first menswear designs, where the designer turned model to understand what "felt right" and what didn't. "Once I figured out where he [the menswear collection] was going, I would take the blazer and put on the female fit model and allowed that silhouette to affect where the design would go. One very much affected the other."

That in-built fluidity between men's and women's means that rather than having a dedicated menswear collection, and separate womenswear collection, which drawing from similar codes, we the consumer have so much more to choose from. Expect to see the boys borrow from the girls and vice versa, as Kirsten Dunst did on the launch night when she wore the brown floral men's pyjama suit for her front-row appearance. (Expect that to be among the first pieces to sell out fast.)

If breaking down the dichotomies of fast fashion versus enduring style and masculine versus feminine isn't enough, there is one other boundary Erdem has readily revelled in: the mix of formal and informal. It is the unabashed combination of the high and low: the ballgown and the hoodie; the T-shirt and the tux. "Like the Pet Shop Boys video directed by Bruce Weber in the Nineties, I found that meeting of opposites really interesting to work with."

"To me, it just feels very British," reflects Erdem of the whole collection. And in times like these, we can't help but feel like we could all use a dose of his optimism and elegance too.

Posted by FASHIONmode News at 4:03 PM