Alessandra Hangs Up Her Wings

Alessandra Ambrosio has confirmed rumours that the 2017 Victoria’s Secret Fashion Show in Shanghai was the last time she will walk for the lingerie brand.

The Brazilian beauty has modelled for Victoria’s Secret for 12 years, making her runway debut in 2005 and becoming the first model for its Pink diffusion line a year later. In 2008, she walked the runway just three months after giving birth to her first child, while 2011 saw her make brand history by wearing the heaviest wings ever created for a show. 2012 marked her Fantasy Bra debut, and in 2014 she was granted the honour again, as she joined fellow Angel Adriana Lima in wearing $2.5 million Dream Fantasy Bras. 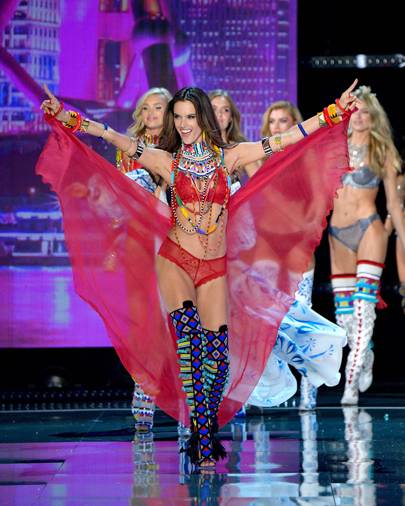 The 36-year-old mother-of-two took to Instagram to share the news with her 8.8 million followers in an emotional post that read: “Words cannot describe how grateful I am to have been working for this amazing brand that inspires me and women all over the world. In my wildest dreams, I would have never imagined doing 17 Victoria’s Secret Fashion shows.”

The move to hang up her wings comes after a personal decision to devote her attention to her swimsuit line, Ale by Alessandra, and focus on building her acting career.

Posted by FASHIONmode News at 1:33 PM