The Duchess of Cambridge was one of 16 members of the royal family to attend the state banquet in honour of President Trump on the evening of June 3. The event, which is seen as the highest of honours possible for a visiting head of state, was hosted by the Queen, who told the 170 Buckingham Palace guests that the dinner was to “celebrate an alliance that has helped to ensure the safety and prosperity of both our peoples for decades”.

For the occasion, Kate looked to her trusted designer Sarah Burton at Alexander McQueen for an unabashedly glamorous gown befitting the formal dress code. It’s a move we have seen the mother-of-three make before. Remember the blue-grey princess gown – or “prom dress”, as the Twittersphere decreed – Kate commissioned from McQueen for the October banquet honouring the Queen and King of the Netherlands? The sartorial match between British fashion house and royal family member has defined Kate’s tenure in the spotlight so far, and will continue to flourish as time goes on. 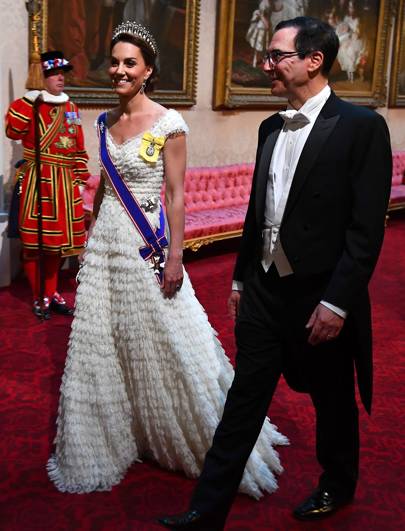 Last night’s look shifted away from the kingfisher blue that is synonymous with the royal family – the Queen has often favoured icy tones over the years – to a paler palette. The white sweetheart-neckline gown made up of tumbling micro-ruffles was accented with jewellery and tokens rooted in generations of tradition. The Lover’s Knot tiara – commissioned for Queen Mary in 1913, and a favourite of Diana, Princess of Wales – and the Queen Mother's sapphire-and-diamond fringe earrings amped up the splendour of Kate’s ensemble. The Duchess also wore a blue sash to symbolise her role as a Dame Grand Cross of the Royal Victorian Order, an honour bestowed upon her by the Queen on her eight-year wedding anniversary to Prince William.

Aside from Trump's inner circle – including his wife Melania, who wore a white Dior gown with sheer neck detailing and matching gloves – most of the dignitaries at the pageant were invited on the basis of their cultural, diplomatic or economic links to the US. But the Duchess, in her own interpretation of national dress, was there to support the monarch, whom Trump praised as “the spirit of dignity, duty, and patriotism that beats proudly in every British heart”.

Posted by FASHIONmode News at 7:06 PM