Karlie Kloss may have might have married Josh Kushner last year, but that doesn’t mean the couple can’t continue to celebrate their commitment to one another. Over the weekend, the pair threw a wild west-themed party in Wyoming with some familiar faces, including friends Katy Perry and Orlando Bloom, joining the fun.

The two-day extravaganza, which involved cowboy-themed attire, saw the couple taking part in a traditional horah dance as they were lifted on chairs in front of their loved ones. Kloss, who wore a custom Dior dress to wed her fiancé in front of 80 guests at an upstate New York ceremony on October 18 2018, opted for a low-key white lace off-the-shoulder dress this time around. 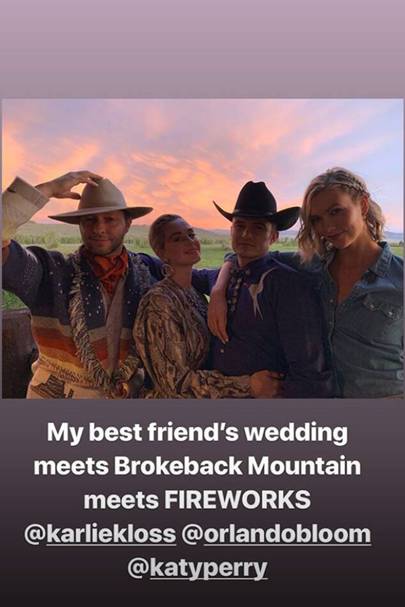 From Bloom to Derek Blasberg, several friends took to Instagram to share sweet messages to the newlyweds. “Wonderful weekend of being loved and celebrating love, congrats to a beautiful union,” wrote Bloom, along with a photo of him and Perry.

Kloss met Kushner, who is the brother of Jared Kushner, advisor to Donald Trump and Ivanka Trump’s husband, in 2012. “We’ve really grown together personally and professionally,” Kloss told Vogue after the proposal. “Josh knows that I’m just a nerdy, curious human being. I think that’s why he loves me. We have each other’s back.” The pair got engaged and wed three months later.