Clare Waight Keller’s first large-scale Givenchy menswear presentation was noteworthy in a number of ways. For the headline slot at Pitti Uomo, the brand took over the Villa Palmieri overlooking Florence to premiere an opulent spring/summer 2020 collection inspired by the streetwear scene coming out of Asia. It was “never too couture and never too normcore,” Anders Christian Madsen. Every new look was styled with trainers, including a collaboration with Onitsuka Tiger – the first time the French heritage brand has partnered with a sneaker manufacturer on a global scale.

The two brands served up two variations of Onitsuka Tiger’s “Nippon Made Mexico 66” styles: an all-white version with the footwear brand’s signature stripes and Givenchy lettering; and a black version with Givenchy detailing in red and white. A back tab bears the dual inscription “Givenchy - Onitsuka Tiger” on each pair. 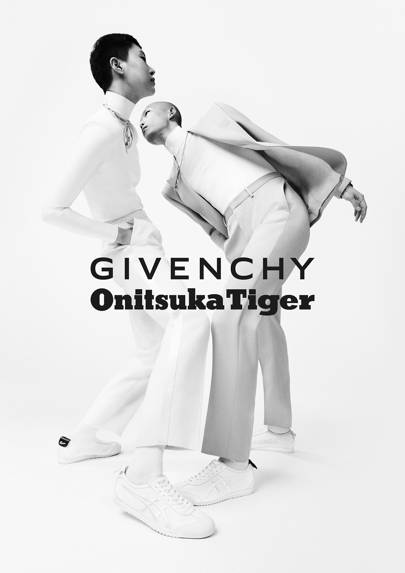 Waight Keller, it turns out, is a longtime fan of the latter, which is a subdivision of Asics and one of the oldest shoe manufacturers in Japan. She personally wears the “Mexico 66” style, and wanted to bring a graphic monochrome version of the sports shoe to her discerning – and growing – menswear audience.the streetwear market’s method of selling product via “drops”, Givenchy has launched both styles in each brand’s respective online and bricks-and-mortar stores worldwide today – one day after the catwalk presentation. The footwear blogs are already going wild for the sneakers, which are priced at €450 for both men and women. Could the luxury lace-up find its way onto the feet of Waight Keller’s most high-profile client? Time will tell whether the Duchess of Sussex is willing to trial a new pair of kicks that aren’t Vejas or Supergas.

Posted by FASHIONmode News at 1:46 PM