Beyoncé Was A Lion Queen At The Wearable Art Gala

With only a month until Disney’s live-action adaptation of The Lion King hits cinemas, you might be wondering what the cast will wear during the promo tour. At the Wearable Art Gala this weekend, Beyoncé showed the potential to channel the jungle theme of the film into fashion.

While some guests at Tina Knowles-Lawson’s annual event went for face paint or voluminous gowns, Beyoncé arrived at the Santa Monica venue dressed as a lioness. In a Georges Hobeika gold catsuit with layers of sequins and a big cat sewn into the bodice, she more than embodied the spirit of her character, Nala. 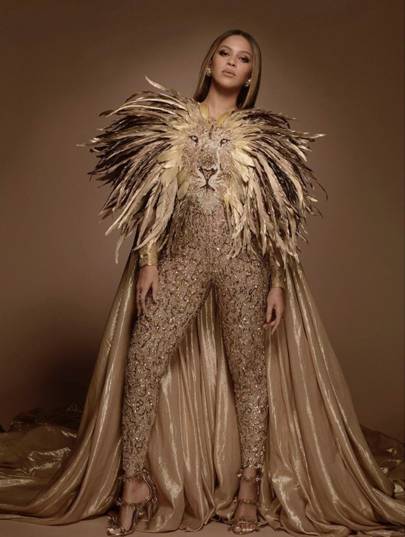 With feathers and a flowing gold cape, Beyoncé gave onlookers a lion queen moment alongside her daughter Blue Ivy, who wore an adorable yellow gown with matching headdress. The star took things one step further on Instagram, sharing multiple views of the look and a video of Blue Ivy singing along to “The Circle of Life.”

Beyoncé still has the film’s premieres and press dates to dress for in the upcoming weeks, and her spirited interpretation of Pride Rock style means there’s plenty of great fashion on the horizon.

Posted by FASHIONmode News at 7:03 PM