Balmain To Host The Most Fashion Forward Music Festival Of 2019

On June 21st, the fashion and festival worlds will collide. Helmed by Olivier Rousteing, Balmain's spring/summer 2020 menswear show is being transformed into a music festival in the heart of Paris's Jardin des Plantes.

After joining creative forces with Kanye West, a collaborative duo behind some of Beyoncé's most electrifying onstage looks, Olivier Rousteing is again proving his worth in the music scene by putting on his own music festival. On June 21, as a part of Paris's Fête de la musique, the designer will fuse fashion with music for Balmain's spring/summer 2020 menswear show, by putting on a concert following the runway show. 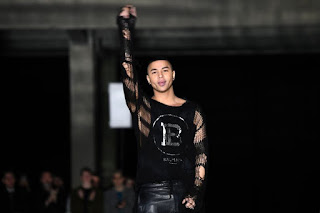 Rousteing has called upon DJ Gesaffelstein, among others, to bring Paris's Jardin des Plantes to life. To attend the show, be sure to head to Balmain.com on June 7 at midday (French time) for the chance to reserve one of 1500 free tickets. At the event, guests will be invited to join Olivier Rousteing and the Balmain Army in support of the charity (Red), founded in 2006 by Bonofrom U2. Donations and the profits from limited edition Balmain products and drinks sales will go toward the global fight against AIDS.

Posted by FASHIONmode News at 9:21 AM