Donatella On Suits Versus Dresses

Donatella Versace may have contributed to the allure of the gown more effectively than almost any other designer, but it seems that Versace herself is feeling the draw of the trouser suit this season just as keenly as the rest of us. The designer was in London for the launch of her new book, Versace, at the Victoria & Albert Museum, where she also revealed that there has been a shift in her approach to the fashion calendar as a whole.

“A woman is much more powerful in a suit than in a gown these days,” she said, WWD reports. “I still want to do couture but not necessarily put it on the website or on the catwalk. I think it will become more exclusive, I will show it to a small group of people. I feel a lot more comfortable doing ready-to-wear.” 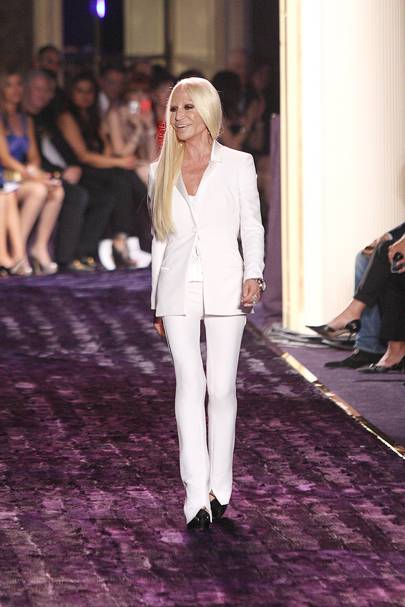 Versace also spoke about friend and collaborator Lady Gaga – currently ubiquitous thanks to a new album and with appearances at the Victoria’s Secret show, forthcoming Superbowl, and the new Bradley Cooper movie A Star Is Born. The singer is set to play Versace in the next American Crime Story, but it’s not the first time she’s tried to emulate the designer.

“Lady Gaga was obsessed with my look, I’m not sure why,” Versace told interviewer Tim Blanks at the event. “But it’s great that she can go from the eccentric look with the meat dress to an elegant, glamorous woman.”
Posted by FASHIONmode News at 2:11 PM