J.W. Anderson is London's odd man out, a designer of clothes whose enduring peculiarity has made him fascinating and frustrating in equal parts. And he's never much helped matters with his own neurasthenic rationales. But the directness, theaccessibility of Anderson's new menswear collection suggested a breakthrough rather than a breakdown. True, he claimed "the personality of the bourgeois woman" as an inspiration, and the pink-carpeted setting of his show was, he said, intended to convey the atmosphere of "a shoe salon" where such a woman might spend time.

Scarcely a promising scenario for a collection of mens-wear, but gender blurring has always been an Anderson trait, and here it yielded clothes whose softness and languor were—what else?—oddly appealing, especially in the bias-cut tops that slipped off the shoulder or the hip into loose scarf-ties. "Sleepy eroticism" was the impression he wanted to convey. He succeeded, with some help from Michel Gaubert's skittering, jazz-inflected soundtrack. 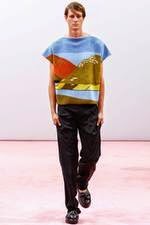 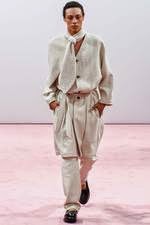 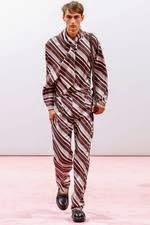 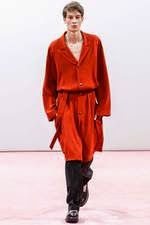 Anderson also talked about "perverting classic men's shapes." Coats became fluid coatdresses. Jackets were slashed open at the back. A cabled cardigan was cropped and zippered, its neckline scooped dangerously low. Yet there were also pieces that were as straightforward as anything Anderson has ever made. Striped polos with matching pants, for example, or tank tops, or a finale that might as well have been his version of baseball shirts. And the show opened with cap-sleeve tops patterned after the work of octogenarian carpet designer John Allen, which were items of bucolic loveliness.

True to character, Anderson felt compelled to point out the dropped pockets, which made the models stretch their arms. "A bit creepy," he mused. "It feels normal, but it's not." It seems he just prefers things twisted, though this collection proved his personal preference needn't get in the way of our desire. Besides, normality is an overrated concept.

Posted by FASHIONmode News at 11:08 AM