The Most Stylish Baby In The World: Harper Seven Beckham

Move over Suri Cruz. The world has been blessed with  a serious minature fashionista. Victoria Beckham has given birth to a baby girl – the first daughter for the former Spice Girl and her footballer husband David.

The baby, named Harper Seven, was delivered on Sunday at Cedars Sinai hospital in Los Angeles.

In a statement on his Facebook page, former England captain Beckham said: "I am so proud and excited to announce the birth of our daughter Harper Seven Beckham. 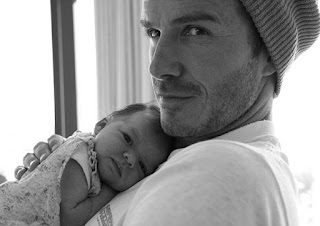 "She weighed a healthy 7lbs 10oz and arrived at 7.55 this morning, here in LA. Victoria is doing really well and her brothers are delighted to have a baby sister xx."

Their spokesman, Simon Oliveira, announced the happy news on Twitter.

"David & Victoria Beckham are delighted to announce the birth of their daughter," he wrote.

In another posting, he added: "Brooklyn, Romeo and Cruz are excited to welcome their new baby sister to the family."

Forget trips to Mothercare for the Beckhams latest arrival though, baby grows and footwear from the likes of Chanel and Manolo Blahnik are already adorning the nursery.
Posted by FASHIONmode News at 6:18 PM