After months of rumours and speculation, Angelina Jolie has been unveiled as the new face of Louis Vuitton’s Core Values campaign.

The image, shot by acclaimed photographer Annie Leibovitz  shows the Hollywood star sitting barefoot in a wooden boat on a river in Cambodia, wearing everyday pieces from her own wardrobe, with her long dark locks in natural waves and her own weathered, monogrammed Louis Vuitton Alto bag slung over her shoulder. 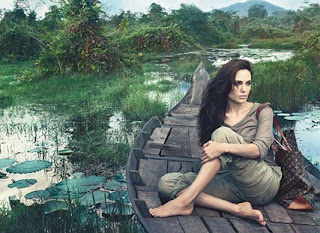 The au natural look reflects the unspoilt setting of the Siem Reap province in Cambodia, where Jolie reportedly took her gorgeous brood of children to the photoshoot.

The campaign image, which was released today, is set to run for at least 18 months as part of the French fashion house’s Core Values initiative, which aims to promote travel and an awareness of global issues. Other stars who have posed for the cause include Bono, Catherine Deneuve and Sean Connery.

The image reaffirms Angelina’s long-standing love affair with Cambodia. The star fell in love with the South-East Asian country whilst filming the first Tomb Raider movie in 2000. She later adopted son Maddox from the country and she and partner, Brad Pitt set up the Maddox Jolie-Pitt Foundation, which helps community development and conservation in the country.

Posted by FASHIONmode News at 3:52 PM