At the ripe age of 26, Kelly Osbourne can hardly be described as a girl. But she has bagged the plum job as the face of Madonna and daughter Lourdes (Lola) fashion line, Material Girl.

While she didn't seem to be wearing much in the way of Material, Kelly looked cute and edgy in a pair of black high-waisted shorts, a cropped denim shirt and a Madonna favourite - a funky bra.

With her many tattoos on show, the blonde starlet showed off the style that had Lola and Madonna gushing when they announced she was set to front their new campaign. 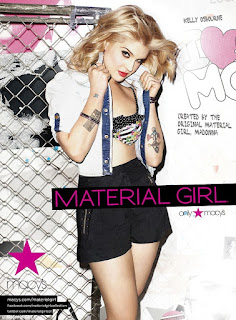 Madonna said: 'Kelly represents a true Material Girl. She is edgy, cool and has a unique sense of style that Lola and I love.'

The ads were shot in Manhattan's East Village neighbourhood. In a joint interview with co-designer Lourdes 'Lola' Leon Ciccone, Lola and Kelly confidently talked up the range pointing out their favourites. 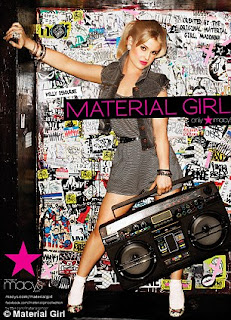 'The military jacket. I love that and I put it with a bunch of badges on it to make it my own, too.

'When it comes to clothes for warmer weather, it’s shorts for spring that are all the rage for the girls. “I’m like obsessed with them,” said Lourdes.

While Osbourne pointed out the accessories. 'The shoes - there’s a pair of nude heels that I’m really obsessed with.

'There’s so much stuff in it that’s so me and what I wear. There’s a leopard dress that I get to wear next that I’m excited about. I love prints,' she told People Magazine.

The pair also mentioned the affordability of the brand.

'There’s not many other companies besides Material Girl that do clothes at an affordable price that are high fashion and [are] what people see in the magazines and can emulate themselves without having to go and spend $1000 on a dress, she said.

Kelly has also admitted to to taking 'so much of my style from Madonna in the 80's and I really admire how Lola dresses and that she stays true to herself.'

Madonna will be pleased to hear all the positive things Kelly spouted about the brand. It has been reported that Kelly had to sign an extensive confidentiality agreement.

Madonna decided on the draconian measure after her previous muse, Momsen, 17, described the range as similar in style to that of a ‘high-class hooker’ and was sacked.