As anyone who has ever been backstage at a fashion show (or watched “Project Runway”) can attest, egomania, depravity and back-stabbing are either fashion’s necessary ingredients or its inevitable byproducts. Without purporting to solve this chicken-and-egg conundrum, Alicia Drake’s “Beautiful Fall: Lagerfeld, Saint Laurent, and Glorious Excess in 1970s Paris” considers a deliciously dramatic case in point. For the 70’s in Paris was not just a time when hedonism reigned supreme, youth flouted its stodgy elders’ expectations and fashion designers, the pied pipers of the new guard, emerged as “creators of fame, sex appeal and glamour that was accessible to all.” It was also the era when two particular designers,Yves Saint Laurent and Karl Lagerfeld entered into a high-stakes, high-profile vendetta that changed the face of Parisian chic.

To understand this quarrel’s origins, Drake, a Paris-based former contributing editor of W magazine and British Vogue, digs deep into the two men’s intersecting life stories. Both titans got their start as middle-class “boys from the provinces, dreaming of Paris.” As adolescents, the Algerian-born Saint Laurent and the German-born Lagerfeld studied at a Paris trade school for couturiers, where, in 1954, they each won prizes in an international fashion competition. By taking both first and third place in the dress design category, the 18-year-old Saint Laurent outshone his friend Lagerfeld, who was three years his senior. Before long, Saint Laurent was designing for couture’s undisputed master, Christian Dior, while Lagerfeld toiled in obscurity at lesser houses.

For a time, the former schoolmates remained close, but by the early 60’s relations between them had cooled. In 1958, Saint Laurent triumphed with his first collection at Dior. (Dior had named Saint Laurent his successor before he died in 1957.) Not long afterward, Saint Laurent met an older man, Pierre Bergé, who appointed himself the couturier’s Svengali. Between the international renown he achieved as Dior’s helmsman and his involvement with Bergé, with whom, in 1961, he founded a label bearing his own name, Saint Laurent had little time for his old school chum. Lagerfeld reacted by declaring haute couture a dying art and forsaking it to work as a freelance ready-to-wear designer. Although the two rivals socialized in the same fizzy beau monde, professionally they were worlds apart.

Compounding this divergence was a profound difference in style. Almost from the outset, Saint Laurent had a highly specific vision of female elegance. With innovations like the safari jacket and le smoking (a women’s trouser suit based on the tuxedo), he developed an instantly recognizable look, reprised in his subsequent collections. (His attitude toward his pets betrays a similar fixity of spirit: “Each time one of Yves’s French bulldogs dies, he mourns it, buys another and calls it Moujik,” the author writes.) Lagerfeld, by contrast, was predictable only in his self-proclaimed habit of “vampirizing” any and all cultural references that came his way. His ready-to-wear confections betrayed a wild eclecticism. His signature statements like the ponytail, sunglasses and fingerless gloves he sports today were reserved mainly for his artfully outrageous self.

The more publicly flamboyant of the two designers, Lagerfeld was far less adventurous when it came to private indulgences. Saint Laurent partook recklessly of the alcohol, drugs and casual sex that abounded in Paris in the 70’s, but Lagerfeld avoided such decadence. As it turned out, “glorious excess” took its toll on Saint Laurent. His substance abuse led to frequent hospitalizations, and to an inordinate dependence on Bergé. (By 1976, Drake writes, Saint Laurent couldn’t write a check, board an airplane or book a restaurant without Bergé’s help.) Lagerfeld ceded control to no one, breaking off friendships once he had mined their creative possibilities or when they threatened to disappoint him. As he declared in 1997: “I was born to live alone. … But who cares?”

In the early 70s, however, Lagerfeld became enamored of Jacques de Bascher, a debauched young nobleman new to the Parisian scene, and began bankrolling his extravagant lifestyle. Bascher intrigued Saint Laurent, too, who saw in him a way to rebel against Bergé’s tight control and to “exorcise certain of his demons,” Drake writes. In 1973, Saint Laurent and Bascher began an affair infuriating Lagerfeld and Bergé, and precipitating the fateful rupture between the two camps.

For Drake, Bascher personified the “gilt-edged decadence” that defined his intimates’ milieu. Drawing on the link he himself made between “decadence” and “falling” (a link that apparently inspired her book’s title), she writes: “For Jacques, it was always beauty that justified the fall. Beauty made even the idea of self-destruction … a possibility.” By self-destruction, the author means not only drug addiction but AIDS, from which Bascher died at 38. But despite Drake’s presentation of him as a doomed artiste, his demise comes more as an anticlimax than as a tragedy of genius lost. Having “never carved a statue or painted a picture” or designed an article of clothing, Bascher left behind only a legacy of hatred between two men far more talented than he. 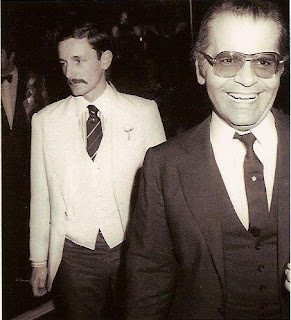 This animosity, though, assumed epic proportions, as Drake, with her insiders feel for fashion-world cattiness, shows in splendid detail. When it relates the fallout from the two designers’ feud, “The Beautiful Fall” crackles with excitement. Mutual friends were forced to choose sides; barbs flew in the press; and the rivalry that had been brewing since their school days became a driving force in Parisian fashion. Declaring himself “the last couturier,” Saint Laurent retreated into what some critics perceived as stultifying nostalgia for his own past work. Lagerfeld took issue with this approach. “The best way of surviving in the present,” he announced pointedly, “is forgetting the past, to permanently recreate one’s paradise.” In 1982, Lagerfeld found a new paradise to recreate when he was tapped to design for Chanel. Lagerfeld’s subsequent “irreverent manipulation of the Chanel oeuvre” a classic case of his “vampirizing” “drove Yves Saint Laurent to distraction,” Drake writes, but it also provided a refreshing counterpoint to his increasingly mummified version of couture.

In 2002, Saint Laurent retired from fashion and became a recluse; his atelier has since reopened as a museum. Lagerfeld, conversely, has breathed “life into a moribund fashion house” and made Chanel one of the world’s most bankable bastions of style. In so doing, he has not only become a legend in his own right, but “invented the blueprint” for designers like Tom Ford, Nicolas Ghesquière and Marc Jacobs, who have likewise catapulted to stardom by reviving languishing labels. Perhaps not incidentally, Ford drew Saint Laurent’s ire when, in 1999, he began reworking the maestro’s best-known staples for the Saint Laurent ready-to-wear line. Ford’s modus operandi was surely too reminiscent of Lagerfeld’s “vampirizing” to appeal to Saint Laurent. Indeed, Drake suggests, by making constant reinvention the watchword of modern fashion, Lagerfeld just may have trounced his great rival at last.

Posted by FASHIONmode News at 8:02 PM