Dior And I, The Film

There was a moment before Raf Simons´ debut for Dior (a couture collection no less) that it all got too much. The designer stepped outside the catwalk space (as it busily filled with people and anticipation) and could no longer hold back the tears.

It's all too easy to think that a fashion show and the clothes just happen when it comes to Fashion Week. Amid a social and style circus; a pit of flashbulbs, stars; celebrity and front row gossip; a collection struts out down a catwalk. We want to be that girl; we want that hair and make-up; and we want those clothes. It's a grand feat of production. And it happens twice a year. But behind it, there are the designers: terrific geniuses but humans also. They have feelings, are scared and feel the pressure too. We forget that. Until you see it up close, which is exactly what Dior And I, the new fashion documentary film by Frederic Tcheng does.

"Up until that show day still I could feel his emotions but wasn't sure if they would come across. I really wanted an emotional dimension to the film," recalls Tcheng, who had been in talks with Dior pre-Raf about making a film following the success of his ventures with Valentino: The Last Emperor (2008) and Diana Vreeland: The Eye Has To Travel (2011). When the announcement came that Raf was the new creative director, he called straight up and said: "What should we do? I'm ready!" 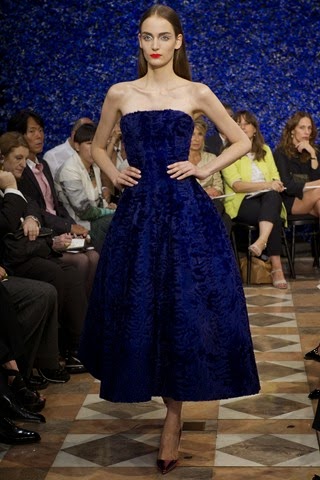 And what he did was create a beautiful and emotive storytelling of that now famed first show back in July 2012 and everything you didn't know that went on in the lead up to it.

As the film shows, Raf is actually a rather shy character - we get to know him and feel for him along the way - he has, after all, got quite the challenge ahead of him. "He was a little reluctant to be filmed. I wrote him a letter first, a director's statement: how we would film and what interested me in the story. I was already clear that I wanted the seamstresses to play a big role in the film, the encounter between the two," says Tcheng, viewing this as a sort of sequel - what happens when the house has to continue the legacy. The house's former creative director,John Galliano was famously dismissed in 2011 following a public anti-semitic rant.

Tcheng went and filmed for a test week and after being suitably quizzed by Raf and relaying that it was a down-to-earth approach he was after, he was allowed to stay on. And so all those lovely and real, heartfelt and stressful, funny and compassionate moments were captured: when Raf is introduced to the atelier for the first time; when he comes up with seemingly impossible-to-realise ideas (you'll have to watch to find out their fate); when he's too scared to do a finale bow circuit of the catwalk for fear he might faint; when he's being photographed by the great and the good of fashion and film; and most poignantly when he's being photographed post-show with his parents. Aww. Because he's just like us too.

"For me, the process of empathy is crucial when making a film," reflects Tcheng, who found himself personally affected. "Raf, c'est moi. I felt a strong connection with Raf's story, our journeys were similar." This film, the biggest and most emotive he had done yet. "Emotionally I was in a very similar place: excited, scared, overwhelmed. After two months, I felt like I had made that collection with them."

In those two months (by comparison the Valentino documentary was filmed over two years), Tcheng ended up with over 250 hours of footage - not to mention some wonderful characters in the seamstresses and Raf's right-hand man, an incredible insight into one of fashion's biggest appointments and a film that really should go straight to the top of your film viewing list.