The young creators are up against the designer behind Team GB’s Olympics kit for Designer of the Year at the British Fashion Awards 2012. In an announcement made last night at The Savoy, Mary Katrantzou and Christopher Kane  face Stella McCartney for the annual ceremony’s top accolade, Designer of The Year. And whilst McCartney has had a standout year with her major involvement with London 2012, Kane and Katrantzou have both been responsible for turning the limelight back on London Fashion Week – from the onset of Kane’s neon lace bodycon dresses in 2007 to Katrantzou’s innovative prints since launching her label in 2009. "There’s always a point of difference to British fashion, it dares to be different to everyone else," Kane tells us.

Nothing is ever boring and British fashion is really establishing itself at the forefront of global fashion. 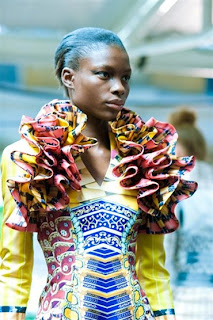 Also present at the reception was Jonathan Saunders, nominated for both the New Establishment Award and Emerging Talent for menswear, and Roksanda Ilincic, whose romantic, tumbling dresses loved by style icons from Carey Mulligan to the Duchess of Cambridge, is pitted against Victoria Beckham, Stella McCartney and Alessandra Rich for the Red Carpet Award. Meanwhile, the Isabella Blow Award for Fashion Creator sees Katie Grand nominated a second time, along with Edward Enninful and Professor Louise Wilson who is surely a strong contender – that a handful of nominees passed through her discipline on the Central Saint Martins MA course is but a small indication of her influence on the industry.

Winners will be announced at the British Fashion Awards 2012, taking place 27 November and hosted this year by Lauren Laverne and Nick Grimshaw.

The winner for the British Style Icon is chosen by public vote.

Posted by FASHIONmode News at 7:35 PM