Clad in a camisole, which was almost cut to her navel, Rosie managed to protect her modesty as she modelled in front of a packed crowd in Brazil.

Rosie, who topped FHM's Sexiest Woman list in 2011, completed the pyjama-style look with a pair of matching trousers and a faux fur bolero. 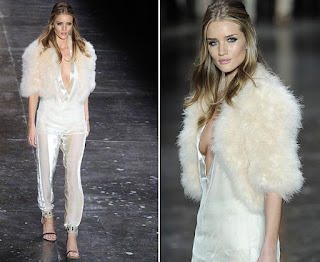 The British beauty was sporting the revealing attire for the Animale Show at Sao Paulo Fashion Week.

Dazzling Rosie recently took a break from her catwalk career to try her hand at acting.

She starred opposite Shia LaBeouf in robot action flick Transformers: Dark of the Moon.

While reviews were mixed, critics were united in praise for her incredible cheekbones.

And in good news for her many admirers, Rosie recently revealed she has no problems with stripping off:

She explained: "Going topless for Vogue wasn't a big deal at all because of the way it was done.

"It was one of the most enjoyable and tasteful shoots I've ever done. I am so proud of it."
Posted by FASHIONmode News at 6:12 PM