Kate Moss to Design her Own Wedding Dress. 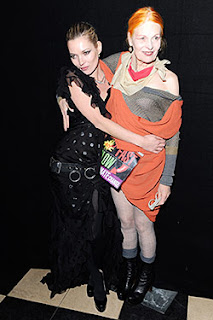 From the runway to the aisle, bride-to-be Kate Moss is reportedly in full wedding planning mode. And of course the biggest question we've all been wondering -- what will the fashion icon wear? We know she has her own line for Topshop, and rumor has it, she's designing her own wedding dress as well.

Well-known designer and friend of Kate's for 15 years, Vivienne Westwood let the secret slip last week.When asked if she was going to create Kate's dress, Vivienne said, "No, I think she's designing it herself. She has done her own fashion range and she knows about clothes. She knows what she is doing, she doesn't need my help."


Then again, maybe her mind isn't totally made up, reports that during a London Fashion Week dinner for Topshop, Kate announced that John Galliano would be designing her gown. The creative director for Christian Dior, John Galliano has been friends with Kate since the early days of her modeling career.

Kate's wedding to 'The Kills' frontman, Jamie Hince is planned to take place July 2, with Kate’s eight-year-old daughter Lila Grace as her chief bridesmaid.
Posted by FASHIONmode News at 9:04 PM