From Princess Margaret’s 21st birthday gown to the thousands of paper roses blooming in the garden-themed chamber, the mood of Christian Dior: Designer of Dreams is decidedly British. The exhibition is a reconfiguration of the 2017 Paris show, Christian Dior: Couturier du Rêve, at the Musée des Arts Décoratifs, with a different thematic journey, 60 per cent new content and an original installation celebrating the country a 21-year-old from Normandy fell in love with upon his first visit to perfect his English.

“The relationship between Monsieur Dior and British culture is fascinating,” the current creative director of Dior, Maria Grazia Chiuri, tells Vogue during a preview. “He came here because he wanted to be free – it’s the same story of many. Britain is a place that is strongly about freedom and this comes across in its fashion. I’m lucky to have this important legacy to move the brand forward.”

Led by fashion and textiles curator Oriole Cullen and set designer Nathalie Crinière, Designer of Dreams is the first fashion exhibition to be staged in the V&A's new Amanda Levete-designed galleries, and the largest of its kind at the museum since Alexander McQueen: Savage Beauty in 2015. From the recreation of the Avenue Montaigne Dior boutique façade that welcomes visitors, to the temple de l'Amour in Versailles in the "Historicism" section and the expansive ballroom at the exhibition’s close – which features a seven-minute reel of shooting stars and golden glitter rain on the ceiling and walls – this is the V&A in its full glossy regalia.

The first rooms – “The New Look” (a focus on Dior’s famed Bar suit); “The Dior Line” (the designer’s 10 defining looks from his 1947 and 1957 tenure at the house) and “Dior in Britain” (the romance Dior embraced because it made business sense) – look at the clients who embodied Christian Dior’s time as creative director. There’s a sequin-encrusted, Hollywood-esque spring/summer ’50 gown worn by Margot Fonteyn that represented Dior’s experimental phase in the ’40s; the Nonette (Little Nun) suit Dior created for house model Jean Dawnay, who was dismayed that the tailoring did not suggest a more cosmopolitan version of herself; the blood-red silk organza dress novelist Emma Tennant selected for a debutante look that would rock the boat of society conventions; and, of course, the princess-appropriate creation Margaret wore in her 21st birthday portrait. 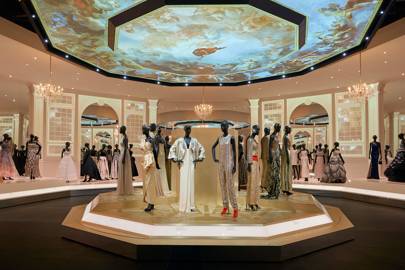 The off-white gown with straw, raffia and mother of pearl embellishments is displayed next to the Cecil Beaton photograph in order to show the difference between the real version and Beaton’s artistic interpretation. “[Beaton] wanted a very strong, striking image, so he played around with the colours,” Cullen explains during the walk-through. “It's interesting because the Swiss technique of using straw complements the golden colour of the dress, but it’s not something you would normally associate with the royal family.”

The narrative of the exhibition then moves away from Christian Dior’s lifetime and on to the themes that inspired him, as Cullen starts to bring in the artistic directors who succeeded him: Yves Saint Laurent, Marc Bohan, Gianfranco Ferré, John Galliano, Raf Simons and Chiuri. The sumptuous “Travels” section looks at the idea of cultural appreciation and what it means today; “The Garden” room is a sensory delight with paper wisteria, clematis, lily of the valley and Princess Margaret-roses cascading from the ceiling; and “Diorama” is a curiosity closet of colour-coded accessories, trinkets and 123 magazine covers from 1947 to the present day. Look out for the vial of fake Dior blood (the brand did a line of film make-up in the ’60s and ’70s) and the bottle of Bobby perfume (a special gift for loyal customers shaped in the form of Dior’s beloved dog, Bobby).

And then, to “The Ballroom”: the all-out unabashed celebration of the glamour of Dior and the fantasy that’s contained within a ballroom (or today’s equivalent). Displayed within the last section are the liquid-gold numbers Charlize Theron wore in the J’adore fragrance adverts during her 20 years as brand ambassador; the first dress Galliano designed at the helm of the house for Diana, Princess of Wales to wear in 1996; and other extravagant Galliano creations that took six people to mount and are a testament to the strength of the models that wore them.

“When you see fashion presented like this, you can reflect on it in a different way,” says Chiuri. “Fashion is not an image, it’s an experience, and the exhibition is a beautiful experience.” The glorious finale seems fitting considering the designer’s own mission at Dior. “I hope to speak about all the women around the world in a contemporary way,” she surmises. “We’re all different, we all have different styles, but Dior is a place where all women can find a place.”

Posted by FASHIONmode News at 3:19 PM