Today, through an interview with CNN Style, alongside the thoroughly modern medium of an Instagram post, 22-year-old model Nathan Westling announced that he is transgender. Having been notably absent from the runways since walking in the Louis Vuitton show last October, Nathan revealed that he has spent the last six months living in Los Angeles and undergoing hormone therapy to align his physical self with his innate identity.


"It wasn't all sunshine and rainbows in the beginning,” he explained to CNN. “My first two months of the transition were tough, and it wasn't until I started to see physical changes that aligned with ... my mental state that I finally woke up and (started) living. I'm happy. I can't even imagine going back to how I was before because it's just darkness." 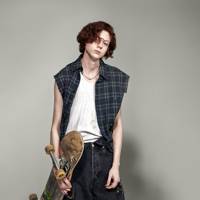 By opening up about his transition and returning to the industry, Nathan will be joining a roll-call of openly transgender models that includes Lea T and Teddy Quinlivan, and proving that fashion can – and ought – be a space in which people are free to express their identities. The last Louis Vuitton show he walked in starred a number of trans, queer and non-binary models, and interrogations of gender are permeating collections across the globe.

While there is plenty more work to be done before equality is the new norm, both in fashion and beyond, Westling’s new headshots (photographed by Collier Schorr) and the outpouring of support on social media prove that he will be as hotly in demand as ever before – and rightly so.