Karl Lagerfeld Has The Last Word On Chanel’s New Podcast

Karl Lagerfeld's legacy looms large over the fashion industry, with designers offering homages this season and his final Chanelcollection to be presented on Tuesday March 5 at the Grand Palais. But, there is still more Lagerfeld wisdom to come. The brand most closely associated with the polyglot designer has released a new podcast featuring one of Lagerfeld’s final interviews.

To launch Chanel’s latest 3.55 podcast series, the French fashion house is debuting an interview between Monocle’s editor in chief, Tyler Brûlé, and Lagerfeld. The interview centres on the importance of Chanel’s many métiers and its savoir faire, and was recorded at the Mercer Hotel in New York before Chanel’s Métiers d’Art show, which was presented at the Metropolitan Museum of Art in December 2018. In the 45-minute conversation, Lagerfeld extolls his beliefs on craftsmanship, fashion and his work, telling Brûlé, “My job is to propose a fantasy.” 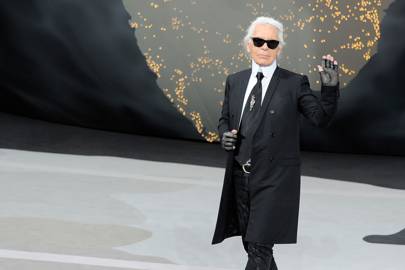 The two continue to discuss the wide breadth of Lagerfeld’s interests, politics to prêt-à-porter, with the designer firmly rebutting the idea that he is obliged to keep the Chanel machine moving. “I hate the expression you have to deliver for,” Lagerfeld says. “I’m delighted to do it.”