Jenna Coleman Gets Guccified In London

Jenna Coleman is an Emilia Wickstead woman. She’s one of Erdem’s ladies. A Dior belle, a Chloé femme. But last night, in London, she embraced a new look courtesy of Gucci. And she did not do things by halves.

For the Sloane Street store’s celebration of the Gucci Zumi bag – which is inspired by musician and jewellery designer Zumi Roscow – Coleman wore the brand’s signature floral suiting. With a mustard Zumi in her hand, there was no other word for it. The Cry star had been Guccified. The only evidence of the feminine flounces and ruffles that have become her signatures? A lace shirt with a statement collar and cuffs. 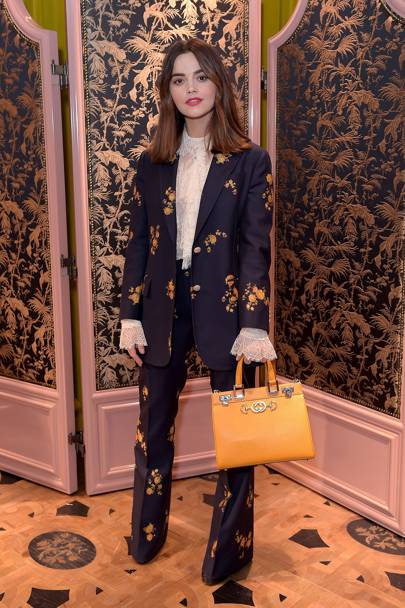 Coleman is enjoying a surge of media interest of late, owing to the airing of season three of ITV’s Victoria. Over the eight episodes of the royal drama, viewers will watch the monarch deal with government pressure to leave London for her own safety, amidst fears of revolution and unrest. In real life, Coleman is celebrating in the capital as she should.

Posted by FASHIONmode News at 4:22 PM