Dua Lipa To Collaborate With /Nyden On Capsule Collections

Today /Nyden announce their latest co-creator: British singer/songwriter Dua Lipa. The 'One Kiss' chart-topper will collaborate with the seasonless H&M-owned brand on four capsule collections, which will include a wide range of sizes. "Dua is one of the most renowned pop artists in the world today. Her strong and fierce attitude, not to mention distinctive style, make her a perfect fit for the /Nyden tribe and philosophy,” said Stina Force, Creative Director of /Nyden. “Dua’s inspiring outlook and style is why we have chosen to work with her and co-create multiple collections.”

First announced back in January 2018, /Nyden, an affordable luxury brand targeted at millennials, will offer different capsule collections, co-created by select 'tribe leaders'. Prior to Dua Lipa, footballer Jérôme Boateng, singer/songwriter Justine Skye, tattoo artist Dr. Woo and actress Noomi Rapace have all been revealed as co-creators, with more announcements to follow in the coming weeks.

"My first love is music, but fashion also plays an important role in my life because I believe it’s so vital to self-expression," the singer-turned-designer enthused, speaking about the genesis of the upcoming partnership. "I look for clothes that reflect strength and fearlessness, but also match up to today’s fast pace. So I’m excited to be co-creating with /Nyden on my designs – it’s going to be a collection that’s completely suited to me, both onstage and off, and for my fans.”

"What I really liked about working together and collaborating with /Nyden is the fact that they allowed me total creative lee-way to create things that I wanted; to make something that I would want to wear, things that I think my fans would really like," Dua explained to Vogue over the phone from Kiev, where she'd just landed for a performance at the UEFA Champions League final. "I just loved that creative freedom." 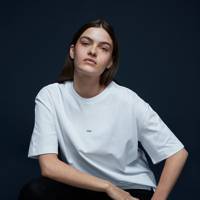 As the most streamed female artist of 2017 in the UK and one of the world's biggest rising music stars how has Dua adapted to the role of fashion designer? "It seemed like a very exciting opportunity to begin with and I didn't really know how much I would actually enjoy it, and how many ideas I'd have. But I love dressing up, I love experimenting with colours. It's really exciting to get to channel that into my own designs. So, I'm really enjoy this new role."

As an ardent feminist who sings about girl power, not giving a fuck and "new rules", the 22-year-old sends a powerful message of female strength and self-belief to her legions of loyal fans around the world. A bold and playful dresser, it is during her performances when Dua often feels most empowered. "I mean, when I'm on stage, I always feel the most confident, whether that is in a body suit or whether I'm in trackies."

So, who has the burgeoning designer been inspired by in terms of fashion talent? "I think what Daniëlle Cathari did with Adidas is really interesting – making something simple, something really really cool and accessible for everyone, and I think she's a brilliant designer. I love the collaboration and I think that's what you want to do, it's to create something simple, that's really cool and effortless and something that everyone can be a part of." When Dua's first /Nyden collection drops in November, it's certain that it's going to be something a whole lot of people want to be a part of.

Posted by FASHIONmode News at 10:52 AM