Carven, and its parent company, Société Béranger, have filed a voluntary petition with the Paris Commercial Court for the French equivalent of Chapter 11 bankruptcy protection, a spokesperson told WWD. It has been officially put into receivership, and is looking for a buyer.

The contemporary Paris Fashion Week brand, which reportedly employs 99 people and has annual revenues in the region of 20 million euros, suffered a substantial loss when the production of its spring/summer 2018 collection was delayed, and it was forced to cancel deliveries.

The ill-fated collection is the first from creative director Serge Ruffieux, who took the helm on February 1 2017. Upon his appointment the brand announced that Ruffieux would oversee "a new stage of growth and development of the house", and Ruffieux, himself, said that he felt “a real affinity for Madame Carven and her vision of fashion.” 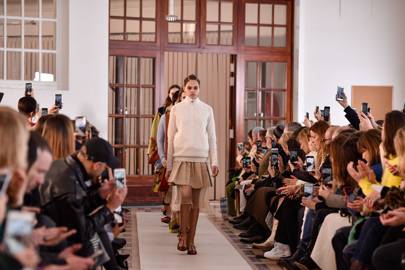 Ruffieux hailed from Christian Dior, where he had been for nearly 10 years. He was responsible for leading the house, alongside Lucie Meier, in between the departure of Raf Simons and the arrival of Maria Grazia Chiuri. His position at Carven, however, is the first time he has headed up a design team alone. And his couture techniques that CEO Sophie de Rougemont praised as being “in absolute synchronicity with Carven's fabled heritage of Parisian chic and effortless elegance," have not been given the chance to play out fully yet.

Ruffieux took over from design duo Alexis Martial and Adrien Caillaudaud, who left the house in October 2016. During their tenure, Carven cancelled the menswear line and parted ways with its designer Barnabé Hardy.

Though it is not known who owns the majority stake, the label, which was founded in 1945 by the late Madame Carven, is held by eight shareholders including Bluebell, Sebaoun and Turenne Capital.

Posted by FASHIONmode News at 10:50 AM