This week, Max Mara descended upon Seoul for the launch of Coats! A sprawling retrospective of the house’s coat history, the exhibition illustrates the evolution of the coat into the status symbol it has become today.

Max Mara sells over 200,000 coats a year. “Recently we’ve seen coat mania,” creative director Ian Griffiths reflected on a tour of the house’s Coats! exhibition in Seoul, which launched this week. “I think the scale of it underlines what Max Mara is about. Luxury is often taken to mean something that costs a lot of money and isn’t necessarily useful, but Max Mara has a use. It’s clothes to get on in the world in.” The third instalment in the exhibition series, which previously visited Berlin and Moscow, the retrospective showcases Max Mara’s outerwear evolution over the past sixty years. Erected in Zaha Hadid’s spaceship-like Dongdaemun Design Plaza, the history of the house unfolds under a monumental dome of screens projecting artworks of the ages. It’s the exuberance of the Sixties when founder Achille Maramotti first set out to “make the ordinary extraordinary,” as Griffiths explained, to the Seventies when consultants such as Karl Lagerfeld and Jean Charles de Castelbajac brought the brand into the fashion establishment. 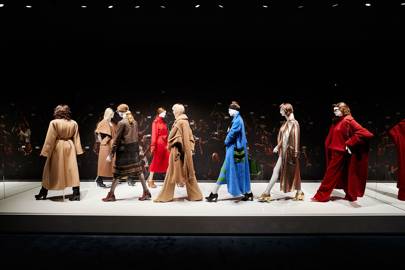 “The perfect coat is the one you’re still wearing in twenty years’ time, which you pass on to your daughter,” Griffiths said. “I can remember my mum having a belted wrap camel coat with a white fur collar. It wasn’t Max Mara but to me seemed like the epitome of glamour. My mum is 81 now and still wears Max Mara, and I still think of what she would have worn. She was probably my first role model.”

The designer grew up on Manchester’s punk-rock scene and was trained by Ossie Clark. “I’m not saying the first coat I ever designed was the perfect coat, but it must have been pretty good because I gave the prototype to my mum back in the Eighties and she wore it for years. Then my sister stole it, and now my niece has stolen it from her. The quality of a Max Mara coat is that you never get tired of it.” Griffiths arrived at Max Mara in 1987, only a few years after Anne-Marie Beretta had joined the brand and contributed its ultimate fashion trophy in 1981, the classic 101801. 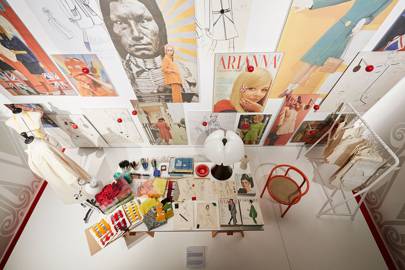 An eternal bestseller, Griffiths put the coat’s longevity down to its architecturally clever design. “It’s got that powerful shoulder shape that gives you a really strong silhouette, and yet the shape to the body is quite fluid and straight. It’s not difficult in any way. It doesn’t depend on your shape. It’s got its own shape. The collar is very bold and direct, it’s double-breasted, and it goes over anything.” It hangs in the room devoted to the Eighties in the exhibition, which takes place in appropriately coat-weathered temperatures in chilly Seoul. “When I come to places like Seoul, I see some women wearing Max Mara coats and a lot of women wearing imitations. And I take that as a positive sign because I know that those women, as soon as they can afford to, will go out and buy an original,” Griffiths said, admitting he’s somewhat averse to a cheap coat. “The ones where I can see that the fabric has gone all pillowy,” he remarked quietly.

“A coat should be a quality item, and a cheap coat really does make me cringe. I think everyone should try and buy the best quality coat they can, because it will last a lifetime.” Walking through the sprawling exhibition, Griffiths pointed out the parallel between Max Mara’s designs through the decades and the way in which women were dressing for social and cultural change. The house’s traditional camel coat, he explained, was the property of the men’s wardrobe until the house appropriated it for its women’s power dressing. “It was the time of Working Girl,” he noted in the Eighties room. “Anne-Marie Beretta built the coats around the body: big, defensive structures that gave you status and made you feel confident.” Moving into the Nineties, Griffiths stopped at one of his own sketches, an almost brutalist Bauhaus-inspired linear coat from 1998, the realised version of which Richard Avedon shot on Maggie Rizer. Now, it’s the official image for the Coats! exhibition. 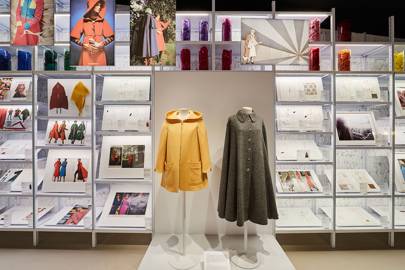 “It’s very moving for me to find, after thirty years, something I’ve forgotten about, but I can remember making this sketch one morning after my coffee break. I must have made thousands and thousands of sketches in my career, but I remember this one,” he smiled, noting that his own contribution to the Max Mara handwriting were coats in “a slimmer, more constructed shape than the Eighties volume, which seemed to be getting too big.” By 2000, Max Mara had taken off globally. Griffiths recalled the “almost weekly store openings” of the prosperous decade when Giambattista Valli was brought in to head up the more couture-like Atelier line, and “there could never be too much fur.” But it was also the decade when Griffiths began working with Carine Roitfeld, who still serves as his stylist on Max Mara. She contributed to a more glamorous Max Mara, which paved the way for what Griffiths considered his personal favourite piece in exhibition.

Inspired by his own youth, the duffle coat from 2006 was covered in gold sequins on Roitfeld’s advice. “I just love the contrast between this tough Mancunian-looking duffle coat, quite grim, but completely covered in sequins,” Griffiths reflected. He was wearing a bespoke grey pinstripe suit with a camel coat over his shoulders. “It’s Max Mara fabric tailored by Timothy Everest in London, so if Max Mara made menswear this is what it would be like,” he explained. “But we’re never going to make it, because for too long women had to borrow from men. Now, if men want Max Mara they’ll have to borrow from women.” His pin-board at Max Mara HQ in Reggio Emilia counts coat icons such as Katharine Hepburn, Greta Garbo, Marlene Dietrich and Marilyn Monroe. “I’ve got this trope that I adore of a movie star arriving at the studio in the morning in a white car with a white coat wrapped at the waist with a belt, and dark glasses and her hair swept back. Off-duty movie star glamour is what I want to give to every woman when she puts on her Max Mara coat.”
Posted by FASHIONmode News at 4:57 PM