Why DSM Has The Ultimate Pull For Designers

The fashion beat may well have moved on to Milan, but here in London, we'll always have Dover Street Market. Now settled nicely into its new home on Haymarket, the hallowed concept store unveiled its latest installations this weekend, adding to the gloriously unique environment is is famed for. From LVMH winner Marine Serre and DSM stalwart Judy Blame, to Adrian Joffe-favourite Roberts Wood and newcomers Jijibaba, we popped down to meet the designers beside their work, to find out how it feels to be one of Rei Kawakubo's chosen ones. 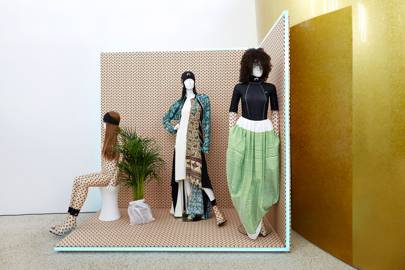 "Adrian came to my tiny flat in Paris and I met him on my lunch break from Balenciaga - where I was working at the time – and he bought the entire collection. It was never meant to be sold, it was made with complete passion. Working for the likes of Dior, Margiela, Balenciaga, I learnt the hard side of fashion and as a result I really know how to make clothes, but it is important to desire the product you are making and not just tell a story. It’s important to feel close to the garments and to not know why you like something but you are still drawn to it. There was a lot of demand after the LVMH Prize, but I will always be loyal to DSM, because it is very important to me to keep working with the people I was working with before the win." 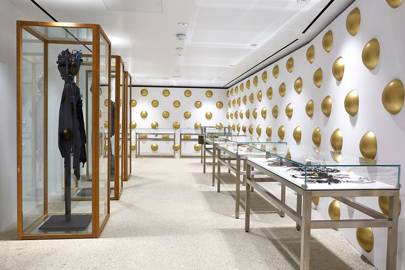 "I was around the first time when Rei was setting everything up. She came to me and said, ‘Judy, I’m trying to do this thing, would you be interested in it?’ I was helping her in Paris on her own label and DSM was just an extension of that. She remembered the days of Kensington Market in the TK where everything had its corner and wanted DSM to be a bit like that but with the likes of Azzedine Alaïa. She changed retailing on the scene. ‘They are prolific,’ she would say, ‘They need their space so people can really see it.’ I will always appreciate that she thought of me. She is very good at supporting the designers she likes – she lets you have an idea, create it with complete freedom and then present it to her. That suits me as I follow my flow – I don’t feel I have to compete anymore which can be ruthless and doesn’t suit my personality at all." 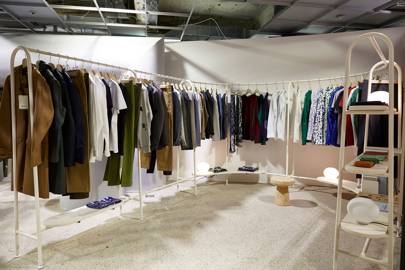 "Launching globally at DSM this week couldn’t be a better start from our point of view, we’re very excited. And there are surprising similarities. DSM is a collection of interesting brands under one roof and Jijibaba will be an interesting collection of designers, designing for the Jijibaba label. I expect that our background as designers rather than fashion designers will result in some differences with our DSM neighbours, but the first 38 items already have quite a distinct identity. But like DSM, we don’t have a rigid set of rules, I think things should be as natural in their surroundings as possible, I’m interested in function, detailing, material quality and a subtle expression of character in things." 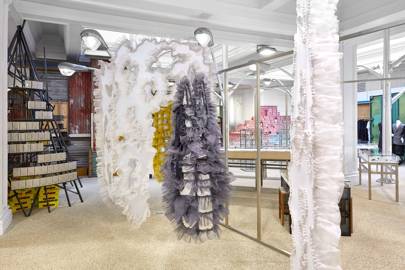 "It’s a dream for a designer stating out for your first collection to be picked up by DSM in its three stores. We were immediately selling worldwide which was really special. It’s one of these special places where you can be creative and there aren’t that many stores that can support the avant garde. Adrian and Rei give you their trust, which is very brave of them – they believe in you enough to not put restrictions on your work which makes designers feel inspired. The installation also offers the luxury of putting something somewhere that the viewer has more time to take it all in, rather than trying to cram your ideas into a two-hour presentation or a five-minute show and lends the idea of ‘discovery’ which from feedback we know people find special. The installation shows all the construction techniques that we use, from integrating fabrics to the non-stitch process."
Posted by FASHIONmode News at 11:29 AM