Like many fashion weeks outside the big four - New York, London, Milanand Paris - LA Fashion Week is still finding its footing. The schedule lacks a major hometown label. Influencers and street style notables weren’t in attendance. The front row included more “friends of the designer” than celebrities. And for all the fashion-related buzz Los Angeles has received this year - with Tommy Hilfiger, Rebecca Minkoff and Rachel Comey skipping New York Fashion Week in February to show in LA - these designers still followed the NYFW calendar instead of showing at LAFW.

To become a must-see for international buyers and press, LAFW needs to both court the big names - homegrown label Rodarte would be a start - and the best emerging talent. LAFW is already showing progress on the latter front. Indeed, we saw several promising young designers that, though commercially unestablished, have already attracted some major celebrity fans. Here were the three who caught our attention this season. 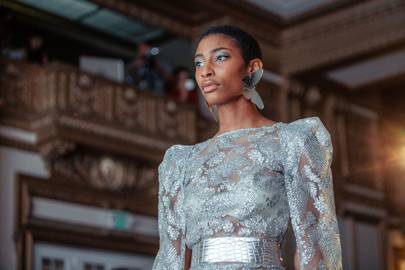 Fashion Week returned to Los Angeles for its fifth season on Wednesday night, picking up where Paris Fashion Week left off. Over five consecutive evenings, catwalk shows were held one after another in a glorious, high-ceilinged ballroom in downtown’s historic Alexandria Hotel.

Marie Burlot and Jimmy Paul Rinsum, the Amsterdam-based design duo behind MaryMe-JimmyPaul, were probably the most well-known designers at LAFW. Their avant-garde pieces are often seen on Rihanna, Ariana Grande and Lady Gaga. Their new collection wasn’t about pop princesses, however. It was drawn from the hobbies of housewives in the Fifties and Sixties – with a twist, of course.

A needlepoint canvas was sewn into a plastic dress. A macramé jacket was paired with matching wide-leg pants that swayed back and forth on the model. “We tried to do it in such a way that it becomes a new form of art,” Rinsum told Vogue. “It is that border between arts and crafts.” Many of the pieces were also made using cheap plastic dry-cleaning bags. There was a shower curtain-inspired dress (hooks included), baggy transparent leggings and a long pastel ombré coat with matching trousers and tote bag that Burlot joked were made out of “real unicorn hair.”

Silicone was the material favoured by New York City-based artist Salcmannova, who debuted her first-ever collection on Saturday evening at LAFW. She stumbled onto fashion while working on a film during a recent trip to LA. At the prodding of one of the organisers from LAFW, she decided to try fashion design, but she didn’t start creating this collection until a month before the show.

Her surreal pieces – flexible silicone dresses, footwear and headpieces – appeared perfectly sculpted on each model. “I’ve only been doing this for three months,” she said. “This came from my movie. I’m an art director, and I like to create a character.” The models wore long braids, blue paint on their faces and elaborate masks that would fit right into an episode of Game of Thrones.

Since hosting his first fashion show at the age of 16, self-taught designer Bishme Cromartie has steadily gained a following for his sexy, sculptural dresses, as seen on Andra Day and Mel B. This season’s glittery frocks and fuschia-coloured separates were all about celebrating a woman’s body. “I want her to walk down the street with a badass kind of confidence,” he said, admitting that he’s not a “sparkle guy,” so working with glitter was a new thing for him.

The 26-year-old Maryland native said he’s going through a time of growth and transition as a designer, so it made sense to draw inspiration from, what else? A butterfly. He sent a pair of oversized butterfly earrings from the show to Beyoncé. Should she wear them, we fully expect they’ll become an accessory trend come spring.
Posted by FASHIONmode News at 2:05 PM