On The Life And Legacy Of Hervé Léger Designer Hervé L. Leroux

Hervé L. Leroux, the French fashion designer who made his name in the 1990s with his second-skin, bandage dresses died on October 6 2017, the Fédération de la Haute Couture et de la Mode confirmed. He was 60 years old.

Internationally known with the name of his first label, Hervé Léger, Mr. Leroux created one of the defining styles of the Nineties. His form-fitting designs, made by stitching together individual strips of materials that shaped and sculpted the body became the ultimate supermodel uniform. Made in a rainbow of colours, Mr. Leroux’s creations embraced and enhanced every single curve of the wearers’ body, perfectly celebrating the sexually-charged femininity of the era. 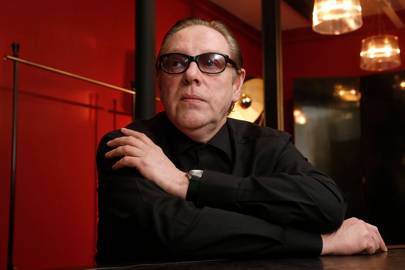 Mr. Leroux was born Hervé Peugnet in Bapaume, a small town in the north of France, on May 30 1957. Abandoning his studies in sculpture and art history, in the late Seventies he worked as a hairdresser and a milliner before meeting Karl Lagerfeld in 1981. Mr. Leroux worked side by side with Mr. Lagerfeld at Fendi and Chanel, before opening his first boutique on rue du Pélican in 1984. The boutique – launched under his new name of Hervé Léger, as advised by Lagerfeld himself – specialised in hand-painted dresses and hats, and became one of Paris’ chic shopping destinations.

In 1985, Mr. Leroux launched his own brand, but continued to freelance for other designers on the side, including the house of Lanvin, Daniel Swarovski and Charles Jourdan. The real breakthrough came with his first show in 1991, when he presented 54 outfits in front of a small crowd in Paris. The moulded style of his dresses, and their body-conscious silhouette, caught the eye of the press. “Léger proved why Paris is the center of fashion creativity,” wrote The New York Times after the show. “His collection was original, well thought out, knowledgeably executed and about as incendiary as style can be these days.” 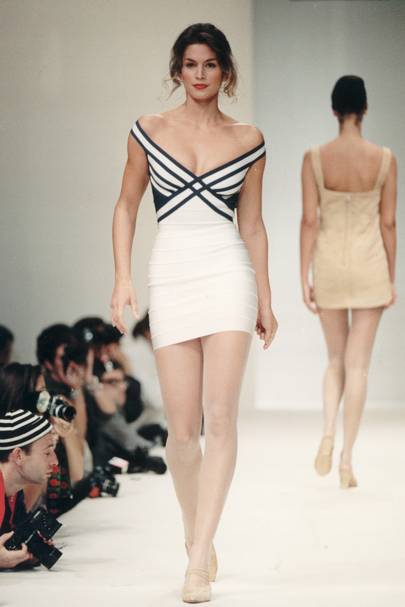 Hervé Léger was acquired in 1998 by the Los Angeles-based group BCBG Max Azria and Mr. Leroux parted ways shortly after, losing the commercial use of his name in April 1999. Undefeated and with the support of his loyal clients, he continued to design custom orders, evening gowns and swimwear under the name Hervé L. Leroux from his new boutique on 32 rue Jacob, Paris. "My clients come from all over the world,” he told Suzy Menkes in 2000. “A woman who likes the silhouette of her body to be made the most of, not with drapes and decoration but with structure.” In 2013, after a 12 year hiatus from the catwalk, he was invited by the Fédération de la Haute Couture et de la Mode to show as a guest during the Couture schedule in Paris.

Dita Von Teese, one of his most loyal customers, remembered him on Instagram. “I’d say he was the only dressmaker that could accomplish a truly modern Madame Grès goddess gown,” she wrote. “I loved him for his wit, his candour, his sublime elegance and of course, his talent, which came from authentic obsession, with no care for the commerciality of fashion.”